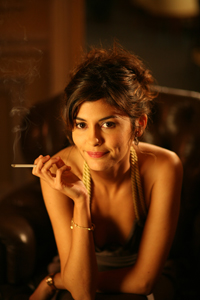 A designer watch: $30,000. An all-expenses paid trip for two to the Riviera: $45,000. A vibrant romantic comedy about a loveable gold-digger and the lowly chap who would do anything to make her happy: Priceless.

Known in Europe as Hors de Prix, this movie is a modern take on the themes made famous by Audrey Hepburn in Breakfast at Tiffany’s. Only this time, it’s a different Audrey making a splash in the title role.

French actress Audrey Tautou (Amélie, The Da Vinci Code) stars as Irene, a drop-dead gorgeous bad girl, gallivanting with men old enough to be her father. Her heart gets the better of her when she meets Jean (played by French funnyman Gad Elmaleh). The two share a passionate night together, only to separate.

But it wouldn’t be a comedy if fate didn’t play a funny hand in getting the two back together again. Through circumstance, Jean and Irene reunite and spend their time together getting used to each other’s worlds.

The creator behind Priceless, filmmaker Pierre Salvadori, displays a rich knack for storytelling, matched only by the luscious sets and wardrobe of his latest effort.

Salvadori takes his cues from many of the great names in moviemaking’s storied past: William Friedkin, Ernst Lubitsch and Frank Capra. His desire to work with his favorite film actors, as well as the revered directors of yesteryear, moved Salvadori into a stint as a performer. However, brief dalliances into behind-the-scenes action soon changed all that.

“The desire of being an actor really disappeared,” he says.

Soon, Salvadori began writing projects and collaborating with good friends (like writing partner Benoît Graffin) on various projects. When Priceless came around, he knew that he wanted Tautou as his leading lady.

In an ultimate act of admiration, he and Graffin created the role of Irene with her in mind. To some, the quirky doe-eyed star might seem a strange choice to play such a cunning vixen, but to Salvador, that’s nonsense.

“Because of Amélie,” he says, “people have a picture of her that’s very narrow.”

And he’s not at all bothered by the suggestion that Priceless is similar to Tiffany’s. In fact, he cherishes it: “There was some part of [Breakfast at Tiffany’s] that belonged to our society now.”