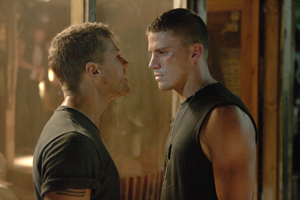 Sgt. Brandon King (Ryan Phillippe) is a good old boy from Texas. He and his best friend, Steve (Channing Tatum), have served their country proud and strong on the front lines of combat in Iraq. With their tours over, they return to their small hometown as decorated heroes.

Things couldn’t be better until Brandon finds out the Army intends to send him back to Iraq against his will. He has been stop-lossed.

Far from being a big-budget, ticket-selling invention of Hollywood, the practice of stop-loss is very real. People who have served our country have to somehow survive “under the radar” for not returning to combat.

“You know I’d hate to have it happen to me,” Phillippe offers. “I can understand the frustration. I think if someone signs up and dedicates and survives the length of what their contract was meant to be … and I know that these soldiers are in Iraq where they hate it. They hate being there. They sit and think every day, ‘I’m gonna get out. I’m gonna give my mother a hug. I’m gonna have a baby. I’m gonna get this job.’ That’s what gets them through their time over there, so I can’t imagine having that all taken away from you.” Phillippe continues, “I see [my character] as a guy who has always sort of known what is right and lived that way through most of his life. I think he is a very straightforward, decent, honest guy and, through the events of this movie, finds himself having to reconsider all those things about himself.

“You know, for me, I never had a political agenda,” he adds. “I didn’t want to feel like the movie did. What is most interesting to me about this movie, in comparison to the other movies that are related to this war, is that this one is strictly from the soldier’s perspective. It is strictly telling the soldier’s story.”

“This movie is pro-soldier,” she assures. “This movie was born from the soldiers’ experiences, literally. My brother fought [in Iraq]. I interviewed soldiers. We include their music videos, the videos that they make, in the movie. We had soldiers, Iraq vets and Marines from other wars look at every version of the script.”

Though this film did not set out to push one political point of view, some cold, hard facts are inevitable.

“There are people who help the soldiers go over the border,” explains Peirce. “During Vietnam, American soldiers, anybody, could go over the border. If you were on the run, you could get a passport at the border. The laws have changed. So now if you’re AWOL, you have to apply for citizenship from the country you’re coming from. These guys can’t do that and you have to wait two years. They can’t get citizenship or refugee status. That’s been rejected.”

Tatum offers his take on the current situation: “I don’t like to get political, but the only thing I have to say about that is that I feel like if there was a regular draft, you know like [during] Vietnam, I don’t think there would be a war still. I think it would affect different families, you know, richer families.”