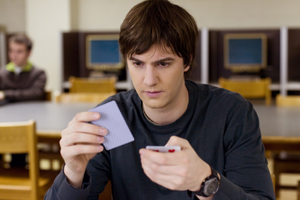 Winning oodles of money in Vegas by counting cards is a mathematical skill that entails strict adherence to a formula that allows few to none emotional journeys in the process; much like this film. We’ve seen this story before – a million times. And just because it’s based on a book that was written from a true story doesn’t make it automatically engaging.

It starts out with an M.I.T. undergrad, Ben Campbell, who has the potential future he’s always wanted: a 4.0 GPA and a stellar MCAT score that has garnered him admission to Harvard Med School. The only problem is that he won’t be able to afford the $300,000 tuition bill, so he applies for a full ride scholarship.

He falls into despair when he’s told that he has to “dazzle” the Harvard Med School board in order to get the scholarship. Boo-hoo, Ben Campbell, you know what? Nobody can really afford med school; you’re not Oliver Twist. There’s a two-word solution at your fingertips: student loans.

So right off the bat, the conflict that’s set up here is weak. From there on out the film drops the checker-like story pieces into the Connect Four-like structure: conflict, call to adventure, cute girl, adventure and reward, more conflict. Blah, blah, blah and oh, blah.