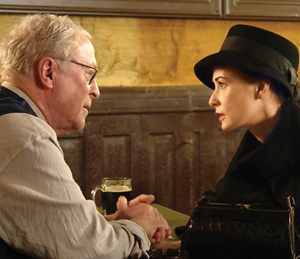 Laura Quinn (Demi Moore) and Mr. Hobbs (Michael Caine) are co-workers employed at opposite ends of the prestigious London Diamond Corporation. She’s a beautiful, brilliant executive who has been repeatedly passed over for well-deserved promotions despite her best efforts to excel and succeed. He’s toiling away as a night janitor, intentionally living beneath the radar and learning all the secrets he can about what really happens to keep the company gears greased.

Their mutual frustration and aggravation brings the unlikely cohorts together and leads them to rationalize that as rich as the mega-corporation is, it surely wouldn’t miss something as trivial as, say, a thermos full of diamonds. If only it were that easy!

Using the word “flawless” as a title is a witty play on words referring, of course, to diamond clarity, but could just as easily describe the performances of the cast; or the way the film captures the look and feel of 1960s London. It could even describe the clever script with its impressive, but believable characters and the motivation that compels them to take the risks they attempt.

Flawless is entertaining and quite enjoyable. It was – dare I say it? – a gem!