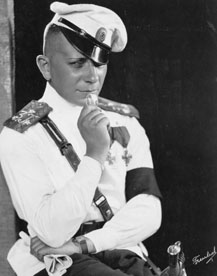 The Academy of Motion Picture Arts and Sciences is currently hosting an exhibition on the life of Erich von Stroheim, the legendary silent-film director (and occasional actor) who was billed by his studio as "the man you love to hate."

Von Stroheim helmed a wide variety of films in the early teens and 1920s, including such titles as Blind Husbands (with a screening of the film opening the exhibition on Jan. 20 and, when it was released in 1919, was the first film to earn over $1 million for Universal Studios), Foolish Wives, The Merry Widow, Merry-Go-Round, The Wedding March and Greed, which is considered by many critics to be the greatest film of the silent era. He also co-starred in a number of films in both the States and Europe, including such classics as Jean Renoir’s La Grande Illusion and Billy Wilder’s dark Hollywood satire, Sunset Blvd., which starred Gloria Swanson and William Holden.

The exhibition itself, which is free and open to the public, will feature a number of von Stroheim’s memorabilia including family photographs and, as the press release states, "early handwritten documents and correspondence which demonstrate the fantasies, fictions and obsessions which would later play out in von Stroheim’s films." Aside from its heavy concentration on biographical material, the exhibition will also focus on some of von Stroheim’s more famous films. Still photographs from the sets of his films – even some projects that were lost or never completed – will also be on display.

The exhibition runs through April 17 and will be open Tuesdays through Fridays from 10 a.m. to 5 p.m. and weekends from noon to 6 p.m. (the Academy will be closed on Feb. 27 and March 27).

LACMA is also presenting a retrospective series of von Stroheim’s films through Feb. 12 that coincides with the Academy’s exhibition. For more information on the LACMA screenings, visit www.lacma.org.

The Academy of Motion Picture Arts and Sciences is located at 8949 Wilshire Blvd., in Beverly Hills. For more information, call (310) 247-3000 or visit www.oscars.org.