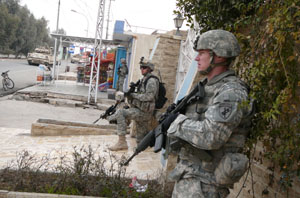 Gas is more expensive now. Bush told us the war was over from the deck of a ship, Michael Moore said no, Kerry said vote for me, Bush stayed in the White House. Rumsfeld resigned, Hussein was hanged, Petraeus took charge.

Life in the United States of America, for a vast majority of its citizens, went on.

But gas in March of 2003 averaged $1.72 a gallon. In March of 2008 it averages $3.28. President Bush declared an end to major combat operations from the deck of the U.S.S. Abraham Lincoln on May 2, 2003 under the banner, “Mission Accomplished.” Moore’s Fahrenheit 9/11 grossed $119 million in the U.S. and won the Palme d’Or at Cannes. John Kerry said, “I believe I can make America safer than President Bush has made us” in his first presidential debate. President Bush got 51percent percent of his re-election vote with 62 million ballots. Rumsfeld resigned on Nov. 8, 2006, Hussein was hanged on Dec. 30, 2006, his death recorded on YouTube-grainy video and Gen. David Petraeus was named on Jan. 4, 2007 to take over from previous commander Gen. George W. Casey, Jr.

Life in the United States of America, for a vast majority of its citizens, goes on because we don’t bother with the details.

We know something is wrong, but aren’t sure what. CNN polls taken near this anniversary say 65 percent of Americans oppose the war. Seventy-one percent think the war is partly responsible for the economic downturn. But only 21 percent of citizens think Iraq is the most pressing issue facing the country today. Americans recognize a cost is being paid, but underestimate the heft of the bill.

Many politicians, generals, pundits and professors have attempted to quantify the financial cost of the war. In 2003, then Secretary of Defense Donald Rumsfeld insisted the cost of the war would be $50 billion. He called ceilings of $200 billion “baloney.” This year, spending on military operations topped $500 billion.

Nobel Prize winner Joseph Stiglitz of Columbia University and Linda Bilmes of Harvard, in their book The Three Trillion Dollar War, estimated the long-term total impact of the war may reach $3 trillion when factoring in aspects including health and disability costs for soldiers, the re-training and re-arming of the military, lost wages and economic opportunity and overall impact including gas prices and global investment.

Close to home, Governor Arnold Schwarzenegger has said that around half of California’s National Guard equipment is in Iraq or Afghanistan, on indefinite loan. In the perspective of adjusted 2007 dollars, the war in Iraq may become the second-costliest American armed conflict, trailing only World War II at $5 trillion.

The human cost remains much more difficult to quantify. American troop deaths hover just under 4,000. The number of soldiers injured nears 30,000. The San Francisco Chronicle reports that 1.6 million soldiers have been variously dispatched to Iraq and Afghanistan, and of those 224,000 have applied for disability benefits. On Jan. 9, 2008, the World Health Organization estimated that Iraqi civilian deaths from start of war to June 2006 numbered between 104,000 and 223,000.

At periods of high violence, over 100 civilians were losing their lives every day. Numbers only hint at such devastation.

And what of the reputation of the United States? What of our own feeling of self, stripped bare after five years of conflict and splashed back to us on TV screens asking, “where do we go from here?”

In light of gross abuses of human dignity endemic to war – including beheadings of imbedded journalists and civilian contractors, the March 2004 torture and humiliation of Iraqi prisoners at Abu Ghraib prison or the Nov. 19, 2005 killings in Haditha, where Iraqi observers claimed that U.S. Marines systematically murdered 24 men, women and children in retribution for a roadside bomb attack – have we made ourselves safer from attack only at the expense of feeling less safe about our own innate goodness, our righteous place and purpose? Is our rhetoric – Operation “Iraqi Freedom,” “Together Forward,” “Enduring Freedom”– as refined through years of global policing and foreign liberation, catching up with the reality of how messy and violent democracy and freedom can be?

In this messy reality, we have pinned our hopes of the moment on the much-lauded troop “surge.” Originally championed by General Petraeus, the surge has indeed reduced many quantifiable indicators of violence in the country to levels below recent numbers but still above those seen in 2004 and 2005. President Bush and GOP presidential candidate John McCain insist that the surge has made Iraq significantly safer and more manageable, so much so that political progress and peaceful national unification are beginning in earnest.

But what comes next? Do we shovel Iraq off onto another president, another decade, another generation? Probably. But we had best send along a message too: Fight wars not as the last resort, but as the only resort. Fight wars where everyone must sacrifice and understand the burden of prolonged conflict. Fight wars with details, not generalizations. Fight wars with simple sentences, not spy satellite photos. Never stay the course because of inertia and its tragic Sisyphean logic. Never forget the cost of war, but don’t equate cost with value. Remember that wars, unlike those who fight them, are never noble, successful or heroic. Do not forget the freedoms of a country to keep that country free.

US News
Prolonged social distancing would curb virus, but at a high cost
699 views

US News
California gunman was ex-Marine who might have suffered from PTSD, sheriff says
1,023 views

US News
Rates of 3 STDS in US reach record highs CD says
1,114 views