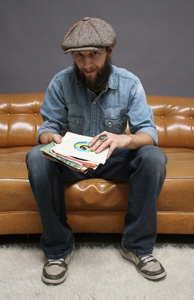 A few weeks ago he stopped by Novena Carmel’s, daughter of Sly Stone, performance with her group BabyStone at Temple Bar. In a rare moment of brilliance, Sly jumped onstage and performed one of Sole’s favorite songs, “If You Want Me to Stay.”

Two people who have hugely influenced Sole are Sly and Jimi Hendrix. You can imagine how wide Sole’s mind was blown.

“I was like a kid in candy store when I first moved out here,” Sole offers. “Every night of the week, seeing legendary people you’ve always looked up to.”

Long ago are the days when Jeremy Ross was a “goofy kid who didn’t quite get it.” Sole jokes that he was the only white, straight guy in a club like Edge of the Looking Glass in Chicago, where he was born and raised. Though he may not have looked the part, his dedication and love for the music was just as pure as the deepest, most knowledgeable record collector.

It’s this passion that has continued to push Sole to higher soul heights.

A DJ since the age of 15, Sole also painted with the WET graffiti crew. He left Chicago for Florida to pursue a degree in graphic and Web design, still DJ’ing for a living.

He lived in Boulder, Colo. briefly, but it wasn’t until he landed in Los Angeles seven years ago that he felt he had truly hit the sonic jackpot.

“L.A. is amazing,” Sole says (again), “in that you could meet a strictly hip-hop DJ, but they’ll also play guitar, write poetry. You know, some real Renaissance-type folks.” So how did Sole assume his penchant for world music?

“To me, record collecting was my first obsession,” Sole admits. “I collected records to sample them as much as to DJ. When I first started getting into world music I was looking for samples, then just like it happens with all records I search for, I started falling in love with the whole composition of the song as it is and not wanting to take that break right there. Records have taught me so much, as well as being my arsenal from which I pull from to make my living.”

When he first arrived in Los Angeles, Sole’s friends in Tulsa, Oklahoma’s Jacob Fred Jazz Odyssey suggested he call up the booking agent at Temple Bar. The Santa Monica hot spot gave Sole his first L.A. gig, which led to him spinning as their resident DJ. From there he was asked to launch a night at Zanzibar, the Temple Bar’s new site down the street, with partners Rocky Dawuni and Cary Sullivan, and Afro Funké was born.

“I realized this is the perfect place for me to expand as a musician and for me to bring the music I love to the dance floor without it being a novelty act,” Sole explains. “We could start a movement of people who appreciate it all, by mixing together seemingly unrelated rhythms from different cultures – until we’re all moving to a truly unified energy.”

Around this time last year (April 2007), Sole received a very special phone call. KCRW asked him to join the ranks of their radio DJs.

“The beautiful thing about KCRW is that they want you to be yourself,” he relays, “to cultivate the authenticity of your soul and truly be eclectic.”

Recently, Sole collaborated with singer-songwriter Emily Wells to compose the theme song for Rami Kashou’s season finale collection on “Project Runway.” Sole is busy working on a five song EP and an unofficial collection of his own Marvin Gaye remixes. He also has a string of appearances this week – as always – and of course, his weekly KCRW radio show and his Afro Funké club night.

“Half of my income is non-monetary,” Sole says with a smile. “Raw, uncut, happiness.”