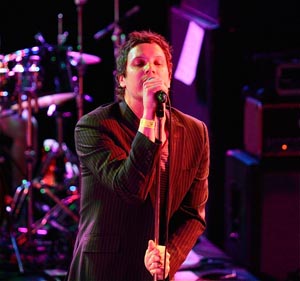 With warrior-poet Justin Sullivan at the helm, English group New Model Army has been consistently delivering meaningful, intense music that defies labels and genres since the early ’80s.

Their 2007 release, High, was created in a relatively short period of time. A flurry of passion and creativity, High stands as one of New Model Army’s darker offerings, a blend of folk and rock injected with Celtic and Eastern overtones.

Sullivan admits that the energy of their punk roots is still ever-present as well: “We were definitely influenced by the imagery and the politics at the time. It’s the spirit with which you do things that’s more important than the technical side of things. I think we still adhere to that.”

Perhaps the last of a dying breed, Sullivan’s storytelling prowess has earned New Model Army cult status and a global fan base from all walks of life, drawn to his tales of working class struggles and challenging political musings.

“In New Model Army lyrics you will find a number of things, themes, thoughts, but at the end of the day most of them are a series of stories. They don’t tend to feature in rock music, but definitely in the folk and country traditions,” Sullivan says. “That’s what people really love, isn’t it? When you get drunk in a bar one night and there you all are together, what do you do? You just tell stories. It’s sort of basic in human nature.”

Sullivan’s inquisitive lyrics examine multiple sides of a story, often encouraging the listener to ponder the impact of each human experience. On High, in keeping with the times, Sullivan touches on the impact of war, and in particular, various perceptions of conflicts.

“The last song on the album, ‘Bloodsports,’ is the kind of song that I always tried not to write but couldn’t help myself. And it’s a lot to do with the fact that we’re living in city that is full of Muslims in Yorkshire,” Sullivan explains. “If you believed all this nonsense that you read and see on the television, you might think that there’s this great clash of civilization between Islam and the West, [that] we’re all shooting each other out in the street. But we’re not. And it’s a complete lie.

“I really like the fact that the last words on the record are ‘I am not at war.’ It’s like there’s a tiny handful of people on both sides of the world who dream of some kind of religious apocalypse. And 99.9 percent of all other people in the world just want to go to work, come home, get paid, and love their children.”

With the band finally free to embark on their U.S. tour in support of their triumphant release (following a previous cancellation due to visa denials), Sullivan talks about his deep love of touring.

“I still think it’s romantic to eat awful food at 3 o’clock in the morning by the side of the road somewhere. I’ve never lost that sense of romanticism, of the troubadour thing.”

When asked what are his plans following the tour, Sullivan reveals, “I don’t really know what will happen with New Model Army because we’ve actually broken up about 18 times! To play intense music, you need intense people. But from a personal point of view, writing songs and going around the world singing them to people, I can’t think of anything else I’d ever want to do.”