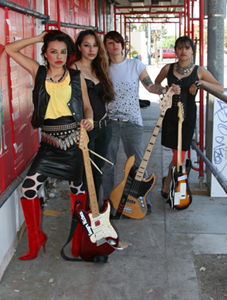 Mystery Hangup consists of four females, three actually blood sisters. The fourth woman is jokingly referred to as an adopted sister. They grew up in Orange County, but their pursuit of music began in their native Oaxaca, Mexico.

There’s a dark edge to Mystery Hangup’s image and music. These ladies are not pop punk, nor are they little girls living out the common dream of being in a band.

Walking into a grimy Hollywood bar surrounded by heavy metal sounds, these girls command respect despite their small statures. Only seconds after the start of their first song, they conquer the crowd’s skepticism and finish their show strongly, proving that they have both the finesse to entertain and the backbone to handle tough crowds.

Mystery Hangup’s debut album, Three Moons and the Crashing Sun, consists of spiritual references to the sun, wicked perceptions of an unborn child and horrific attacks on women. They chose one of their Spanish songs, “Vista De un Ladron,” for their video. The song translates into “Sight of a Thief,” and its lyrics speak about being in the shadows of the moon and dancing with the sun as she escapes laughing, finally encountering love.

The album makes for a credible start in an intriguing story that stems from one young girl emulating Selena. Lead singer, Cat, has forged a style all her own, and these four women have only begun to make their music mark.

They hope to build on their experience on the road last year, which saw them crossing the country with 15 stops on the Sound + Vision Tour. Besides the a West Coast tour, they plan to smash through Mexico, where they’ve been well received.

With quality studio time under their belts and road-tested perseverance engraved in their consciousness, this band rocks for the anti-pop culture. Their upcoming L.A. shows will continue to showcase the still-mysterious quartet.