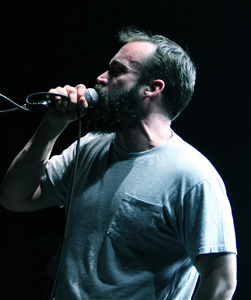 What a night … The Fonda was filling up as the clock struck 11 p.m., and when the time was right, the sound came pouring in. Clutch took the stage and pounded out a beating of songs. The two-hour set was one of their toughest yet.

Not only did they play a lot of the older songs, but they hit a few faves as well. Bodies started to move from the moment the first song hit the chorus.

This is a band that always has put on a great live show. In the three years that I’ve been going to their shows I have never been disappointed.

For a band that doesn’t have a song on the radio and no real presence online, their fans were out in full force to support the Maryland band. In a time when everyone is trying to find the good-looking hit makers, it’s refreshing to be in the presence of a band that’s focused on the music and making sure that the crowd is moving to it.