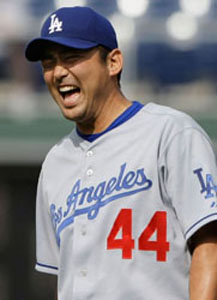 The Tigers made a splash on the free agent market with newcomers Miguel Cabrera, Dontrelle Willis and Edgar Renteria. If Gary Sheffield, Magglio Ordoñez, Kenny Rogers and Jeremy Bonderman can all stay healthy for at least 140 games, the Tigers will win the AL this year.

The only question mark is whether Curt Schilling’s shoulder will be a liability. Other than that, the Sox have promising young pitchers (Jon Lester, Clay Buchholz) along with a winning group of veterans (Manny Ramirez, David Ortiz, J.D. Drew, Dustin Pedroia and Coco Crisp). With the last second addition of Bartolo Colón, Boston should win the AL East.

The Angels made a steal in bringing in Torii Hunter, giving them one of the best outfields in the Majors. Picking up John Garland in exchange for Orlando Cabrera was another great move. If Kelvim Escobar can overcome his injuries, the Angels should runaway with the AL West.

If they can keep C.C. Sabathia, the Indians have a young, solid core that can remain competitive in the AL for years to come.

Alex Rodriguez needs to produce, as does their pitching. How will they respond to Joe Torre’s departure?

The acquisitions of Erik Bedard and Carlos Silva give this team one of the best rotations in the AL.

With no major acquisitions in the off-season, the Blue Jays don’t have enough to keep up with the Sox or Yankees above them.

With a lot of new faces with limited playing time, combined with injuries to key players, Oakland faces a tough road in 2008.

For once, the Rays may move out of the basement, especially with the additions of Matt Garza and Cliff Floyd. An 81-win season is realistic.

They are not getting any younger, particularly with Joe Crede and Paul Konerko posting dismal numbers in ’07 with no hint of improvement. Recently acquired Orlando Cabrera should be a bright spot.

Signing Jose Guillen to a three-year, $36 million contract? It will be two or three seasons before the young talent comes through – coincidentally toward the end of Guillen’s contract.

Strong pitching can carry a team a long way. Except in Arlington, where the rotation is anchored by two pitchers with ERAs above 5.00.

The Orioles were bad enough with Erik Bedard. Without him, it will be a struggle to win 70 games.

The losses of Johan Santana, Carlos Silva and Torii Hunter are huge. They will be lucky if they finish better than last.

How do you fix the greatest regular season collapse in baseball history? Sign one of the best pitchers in the Majors.

Will Joe Torre bring his Bronx magic to Hollywood? Will youth prevail? Will Andruw Jones have a break out year? Can the Dodgers win a playoff series? Yes, yes, yes and yes.

Expectations are higher, but the Rockies have enough talent in Matt Holliday, Troy Tulowitzki and Brad Hawpe to prove last year’s World Series run was not a fluke.

They picked up Eric Gagne as closer, but the fate of this team rides on Ben Sheets. The Brewers, who have a talented offense, will go up or down depending on Sheets’ health.

Pitching is strong – again. Bats are weak – again. They may not be able to keep up in the NL West, but Chase Headley will make a strong case for NL Rookie of the Year.

Perhaps the best team to not make the playoffs. The loss of Aaron Rowand will hurt this team a lot more than most realize.

Danny Haren and Brandon Webb give the D-backs one of the best 1-2 punches in the Majors – if they stay healthy.

Two consecutive playoff absences – expect a third. Despite a solid 2 through 6 on offense, the Braves do not have much more to keep them afloat in the NL East.

The Astros appear headed into re-building mode despite the acquisition of Miguel Tejada.

Gone are Jim Edmonds, David Eckstein and Scott Rolen. Lost to injury, at least in April and May, are the top two starters: Chris Carpenter and Mark Mulder. Newcomer Troy Glaus will not be able to do much to save the Cardinals’ season.

This team has plenty of two things – talent and inexperience, especially on the pitching mound.

No pitcher on its staff tossed more than seven games last season. No significant moves were made on offense. At least they get a new stadium.

New management. No new players. Not exactly the best recipe for success.

The Marlins do not have a pitcher who tossed at least 200 innings in a season. They will be lucky to win 75 games.

They lost Barry Bonds and Pedro Feliz. The team’s ace, Barry Zito, may never have a solid season again. Will anyone actually attend a game?