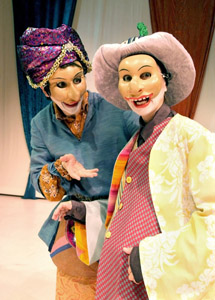 A lowly janitor, Fafalo (Jon Monastero), is made king of Galliandra by a fluke in the mythical country’s bylaws in “Fafalo.” The janitor quickly discovers that being king isn’t all fun and games with the servant girls. His kingdom is besieged by an evil wizard, Banjawi (John Achorn), who demands a mystical object of ancient magic.

Writer/director Stephen Legawiec presents an average play, but the actors have some fine and truly funny moments. Monastero is clever in his comic role. Achorn is a stock villain with little depth, but he pulls double duty as a diplomat named Bogezmo.

The cast is rounded out with Linga the puzzle girl (Anna Heinl), a court librarian, Yungio (David Valdez) and Quank (Julia Emelin). Quank is a terrific comic character – part Harpo Marx, part Lucille Ball. She has a terrific bit of audience interaction.