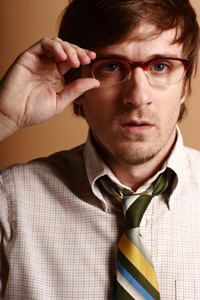 He played Andrew on “Buffy the Vampire Slayer” in the sixth and seventh seasons, and since then has appeared on “How I Met Your Mother,” “House M.D.,” “Joey,” “Six Feet Under” and “Angel.” His silver screen resume just keeps getting hotter with Boogie Nights, Number 23, Boogeyman 2 and Transformers.

Next stop: West Hollywood’s Upright Cabaret and the season premiere of “Samantha Who?” Here, the native son shares some of his favorite L.A. sites.

Hang out: After a sweaty sketch show performance, I take off my wig and fake moustache and head over to the Village Idiot (7383 Melrose Ave., Los Angeles). It’s a British-ish pub with stiff drinks and the best fries ... I mean “chips” in town.

Movie theater: Laemmle Sunset 5 (8000 Sunset Blvd., West Hollywood) for sentimental reasons. My friend Kat and I went to see Welcome to the Dollhouse there when we were in college. We didn’t know whether to laugh or cry. At points we did both. The combination of funny and sad that I first experienced at the Sunset 5 has informed all of my sketches, short films and live performances.

Neighborhood: I love my neighborhood! Beverly/Melrose/Third/Fairfax ... it’s great being able to walk to so many top-notch restaurants, the Grove, Pan Pacific Park.

Hobby: I paint and do some weird art stuff and occasionally am required to make puppets, so I enjoy my neighborhood art supply store, BLICK (7301 W. Beverly Blvd., Los Angeles).

Favorite thing about L.A.: As a UCLA alumni and fourth generation native Californian on my mother’s side, I would just like to say that I am sick of all my friends that have moved to New York and constantly rag on L.A.

Tom Lenk will perform March 28 at the Upright Cabaret at Mark’s Restaurant, West Hollywood and will appear on “Samantha Who?” April 7 & 14 at 9:30 p.m. on ABC.