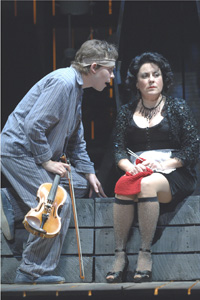 “Sweeney Todd, the Demon Barber of Fleet Street” has been hailed as the greatest musical of all time. This rather extreme praise is all the more curious considering the very un-musical like premise: a middle-aged runaway convict named Sweeney Todd returns to London after doing 15 years on a trumped up charge.

He is hellbent on revenge for the judge who caused his ordeal, which involves the presumed death of his wife and the kidnapping of his daughter. He goes on to become a crazed serial killer, and all the while, he sings about it. Sounds like your average family musical, right?

The book by Stephen Sondheim is brilliant in its construction, and watching the revival at the Ahmanson Theatre is highly entertaining. The twist in this production is that the cast of actors is also the orchestra (playing cellos, violins and even a bassoon).

Musical
Summer: The Donna Summer Musical Comes to the Hollywood Pantages from Nov. 5 thru 24!
2,609 views