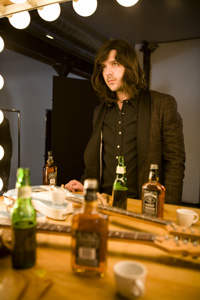 Despite its name, the Hotel Café is not the place to stop for a cup of Joe or to shack up for the night. This Hollywood haunt serves as an acoustic music mecca introducing singer-songwriters to the masses.

Currently a select group of Hotel regulars are trekking across the nation with “one bus, one band and a bunch of friends on the road,” for the Hotel Café Tour 2008.

Those familiar with the Hotel Café know it as the tiny nook off Cahuenga that hosts a number of talented musicians. Artist and tour founder, Cary Brothers, wanted to bring the intimate feel and free-form style of Hotel shows to more than just us Angelenos.

After only three years in existence, it has already sold out nearly every show of the 30-plus dates. Brothers attributes the tour’s success to MySpace and a shift in popular music styles that opened the door for singer-songwriters to stand on their own.

The artist lineup is certainly cause to come out. Some of the names of this year’s Hoteliers are Ingrid Michaelson, Sara Bareilles, Joshua Radin, Meiko, Priscilla Ahn, Kate Havnevik, William Fitzsimmons, Jessie Baylin and Jim Bianco.

Michaelson launched into the spotlight earlier this year when her song “The Way I am,” was used for an Old Navy commercial. This prompted VH1 to make her one of their artists “You Oughta Know” for the ultra-catchy, clap-along ditty.

Brothers’ indie rock songs have appeared on a multitude of sitcoms including “Scrubs,” “Grey’s Anatomy” and “Smallville.” His most recognizable track, “Blue Eyes,” was featured on the Zach Braff composed, Grammy©-winning soundtrack for the film Garden State. The tour will play host to over 15 artists, with only six performing each night. The idea of the tour is to create a constantly moving musical circus.

Each artist plays three songs before hopping off stage and letting the next act have their turn. Most of the time, the artists will reappear for another three songs.

Brothers says he understands that it asks a lot of the audience to stay on board for the disjointed structure of the performances, but so far, the reception has been overwhelmingly warm.

“It’s been pretty perfect,” Brothers says of the tour as a whole.

His idea was that the show should have the feel of an old time Motown review. With sold-out shows and additional dates being added, the formula seems to be working. The first L.A. show on April 12 at the Henry Fonda Theater sold out so quickly that the tour added an extra L.A. date, April 13 at the El Rey Theatre.

With the current boom in demand for the indie rock genre, Brothers definitely had a bevy of artists to select from for the tour. He tells that much of the roster was attributed to timing and talent, but personality was also a component. The chemistry of the tour personalities is part of the allure of the show.

If the musicians seem like they are having a blast, it’s probably because they are, and the audience gets to share in the experience. When artists of a similar genre are confined to one space, once-in-a­lifetime collaborations are bound to happen.

“By the time we get to L.A., we will all be one giant band,” Brothers says.

The Hotel Café Tour will stop in L.A. April 12 at the Henry Fonda Theater, Los Angeles and April 13 at the El Rey Theatre, Los Angeles. For more information, visit www.thehotelcafetour.com.