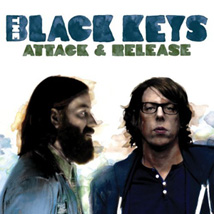 Their finest moments are usually their bluesiest – highlighting Dan Auerbach’s rich, fluid voice (a slice of pure heaven) – even despite their dislike of the term “blues.” And the Black Keys have a signature style, yet manage never to repeat themselves.

That in mind, Attack & Release is the most experimental record they’ve got. It buries Auerbach’s voice under songs marked deeply with the stamp of Danger Mouse’s production rather than the Keys’ uncluttered blues rock. Yet, it is still a relevant record that likely wouldn’t work if performed by a different band.

Heavy on production, Attack & Release shows slight hip-hop-style enhancements to Pat Carney’s hard, choppy drumming, helping the record roll forward and fit more cleanly into the realm of indie territory than usual. Likewise, there are some ghostly choruses beneath layers of acoustic guitar – a combination that offers a hip-hop-meets-bluegrass vibe in places.

For the first time, there are a number of guest appearances, including one by 18-year old bluegrass singer Jessica Lea Mayfield. “Lies” is the best of all, though, gorgeous and much closer to the typical blues ballad that seems to pop up on each Black Keys release, highlighting Auerbach’s chocolate pudding serenade.