Margaret Cho vs. Sheryl Underwood: A Night With Two of the Funniest Women on the Planet 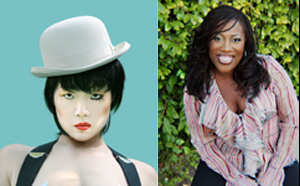 On March 22, Margaret Cho performed at the Orpheum, and Sheryl Underwood worked it at the Improv. I was at both shows, laughing my ass off.

Cho came out with a new look to accentuate her new jokes on her “Beautiful Tour” that almost made her unrecognizable ... until the jokes began. She proceeded to do what she does best, making people laugh while they think, with statements like, “It gets racial whenever I’m around” and how sex can be “like going to the dentist. It’s even more painful if you haven’t done it in a while.”

A few hours later at the Improv, Underwood was actually giving fans a little more than just jokes: She handed out $20 to a birthday girl and another $20 to a bachelorette in the house. Underwood, like Cho, knows a thing or two about being a woman, and she’s not afraid to let you know. Underwood was glowing, shining brightest while talking about what only she can: being a black Republican woman in today’s world.

As both women delivered hilarious verbal assaults on racism, cheating on your man, voluptuous women, celebutantes, penis size, politics and paparazzi, it reconfirmed a few things I already knew before this night: That laughing your ass off is actually good for you, and one day a woman does deserve to run this country.