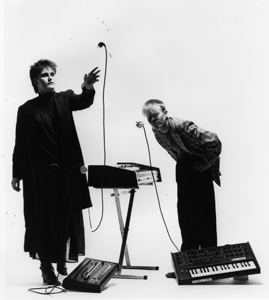 The festival has also announced that they’re offering onsite lodging in the form of premium tenting. You can have brand new tent accommodations waiting for you upon arrival, all decked-out with airbeds, sleeping bags and pillows for each camper.

These tents are in a special area with large plots and more privacy and have access to deluxe showers and restrooms, adjacent parking and complimentary breakfast buffet. Packages are available for two, four or six persons and there’s even a super-deluxe package featuring a fully air conditioned bedroom with an outdoor seating area.

Prices and other details can be found at www.coachella.com. This year’s festival happens April 25-27 at the Empire Polo Field in Indio. Single-day passes are now sold-out, but three-day passes remain available for $269 plus fees.

And it feels so good! J Shock is a new L.A.-based company that’ll be releasing and promoting Japanese rock in the States, starting with CDs from the Underneath and D’espairs Ray.

The Underneath play industrial metal and they’ll be on the North American leg of this year’s Rockstar Taste of Chaos tour showcasing material from their just-released Moon Flower. J Shock has also released a live concert DVD by the band called Spiral Staircase #15 Final.

D’espairs Ray, who’ll also be on the Chaos tour, have been tearing things up in Japan for almost a decade. Their new one is called Mirror.

The Taste of Chaos tour comes to the Long Beach Arena April 10.

Where the Action Was

Esotouric, the folks who lead various offbeat tours in the L.A. area, have teamed up with Amoeba Records to present Where the Action Was, a Hollywood musical history tour. The three-hour tour will be hosted by pop critics Kim Cooper and Gene Sculatti and will visit the hotel where Janis Joplin died, the Continental “Riot House” where Led Zeppelin partied, the one-time roller disco parlor where Prince made his L.A. debut and many other spots that are relevant to music’s history from the mid-’60s through the punk era.

Participants will also be treated to a slide show aboard the bus that’ll feature vintage photos, clips from live performances and album art. The tour leaves from the Amoeba location in Hollywood at 11 a.m. on Saturday, April 5, and tickets are $55 each with KCRW members receiving a 15 percent discount. www.esotouric.com

1980s duo Yaz, the short-lived group that featured Vince Clarke of Erasure and Alison Moyet, will embark on a brief tour this summer and release In Your Room, a box set anthology in advance of those shows. Yaz only released two albums; fully remastered 5.1 versions of Upstairs at Eric’s and You and Me Both are included in the four-disc box set along with a disc of remixes and B-sides.

In Your Room will also include a DVD with new interview footage of Clarke and Moyet along with promo videos for “Don’t Go,” “The Other Side of Love,” “Nobody’s Diary,” “Situation” and “Only You.” A special 12-inch vinyl record of remixes will also be issued to promote the box.

Yaz hasn’t played live for 25 years and fans will only have a few chances to catch them on their Reconnected Tour including three shows at the Orpheum Theatre on July 8, 10 and 11. In Your Room will release in May.