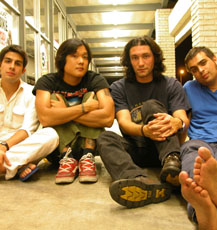 Brothers LuH (guitar and vocals) and Rafael Navejas (bass and vocals), playfully bicker back and forth on stage and during our interview, while the strange fact that one’s a librarian and the other’s a mortician spins in my head. Drummer Nicolas Saveedra and lead guitarist, Osamu Nishitani, make up the other faction of the Anaheim-based quartet Enjambre.

Enjambre literally translates into "swarm," a fitting name for a band whose sound sometimes takes on a sinister purpose, and whose music often comes at fans all at once and from every direction. Truly an equal sum of their parts, Enjambre’s collective novelties are distributed amongst the band, from the wayward vocals of the brothers Navejas, to the rhythmic pounding of Saveedra’s drumming, to the bizarre relentlessness of Nishitani’s chaotic guitar.

Yet the band’s makeup is as polarized as their various musical offerings. For instance, the brothers Navejas hail from Zacatecas, Mexico, Saveedra from Santiago, Chile, and Nishitani from Germany via England and Japan.

"A good, thorough communication helps to clarify any gray areas between us or within the music. As for the cultural differences, we embrace it," says Nishitani, "it makes us unique."

Their musical influences range from classic rock and heavy metal to the grunge and indie movements of the ’90s, yet their sound is secular and highly synchronized, with deranged marching beats and piercing, otherworldly guitar riffs.

Having just released their first full-length album, Consuelo en Domingo on Oso Records, Enjambre’s Consuelo boasts a refined sound. It’s familiarly abstract in its approach, yet a bit foreign to those expecting the unpolished sound of their previous self-produced releases.

"We consider ourselves an indie band because we’ve played small clubs and backyards," says LuH. "Being on Oso Records puts us in the unique position of being a label’s priority – seeing that we’re the first band to sign with them.

"We’re starting from the beginning with Oso Records and we’re discovering the business side of the music industry. The fact that we’re an independent band and they’re an independent label makes it a great match."

Consuelo en Domingo showcases the distinct personalities and attributes of the band as it fluctuates from circus-like serenades, to heavier guitar-driven rock, to mellow mid-tempo ballads without losing its mysterious tone. "It can be complicated (the balance of influences)," says Saveedra, "we can get stuck on a song because we have very different ideas on how it should turn out."

LuH elaborates: "We never contradict ourselves as a band, but at the same time we have two musicians in the band (Saveedra and Nishitani) who bring a cleaner sound. Every song has its distinct personality. A lot of it stems from personal issues correlating with the recording of the record, but the record’s sound overall is a collection of our various influences. Our goal was, and is, to present a different sound that we have yet to hear from any other band."

In 2005, Enjambre will be embarking on a U.S. tour in support of Consuelo. A new step for a band who has become an opening act staple here in Southern California, and a complicated endeavor for a band expected to appeal to a cross-cultural fan base.

"The crowds we’ve played for outside of California are more in-tune with the somewhat commercial bands of the Latin alternative scene. The shows themselves were highs and lows for us, but the support we received was great. We’re excited about visiting those cities again," says LuH.

Under the fixed guidelines of the Latin Alternative scene, Enjambre should have selected only a few cities to showcase their unique sound, but unlike the marketable acts of the genre, they remain uncommitted to the role they’ve been expected to take.