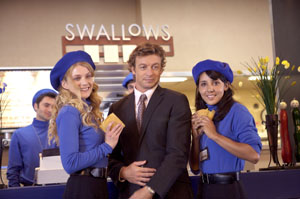 In 1988, screenwriter Daniel Waters penned a little something-something called Heathers. That work sent Hollywood ablaze; every agent in town was hot for the story of three bitchy high schoolers and the BFF that hated them. Twenty years and a number of other projects later, Waters is back to his scintillating old tricks with Sex and Death 101.

He’s happy and content with his life until one day a mysterious e-mail arrives at his office. As his secretary, Trixie (portrayed by hilarious “The Facts of Life” alum Mindy Cohn) reads the names on the list, Roderick realizes that it contains all the women he’s bedded over the years.

She’s a black widow who seduces and kills. Somehow, some way, her path will cross with Roderick’s.

“It’s kind of funny how little either of us has changed ... and that sometimes scares the people around us,” says Waters. “Two Peter Pans on the set can be kind of spooky, but Winona and I still click on the same idiosyncratic, improperly socialized wavelength.”

101 is ripe with bawdy adult themes and plenty of good old fashioned S-E-X. As Roderick goes through the film, he’s placed time and time again in a plethora of amusing and sometimes unusual situations with women.

Who better to cast as a good-guy-gone-bad than Baker? The Aussie star has sent many libidos into overdrive in films like 2006’s Something New and Prada.

Waters feels that he was a natural to take the role of the loveable nice guy who gives himself over to his animal urges.

“I could not have made this movie without Simon Baker – although I didn’t completely appreciate that fact until after the movie was finished,” admits Waters. “It was very important that the character getting this list was not a goofy, giggling geek immaturely ejaculating over the promise of boobies. But it was equally important Roderick Blank not be the sleek, sleazy ‘ladies man’ getting an over-the-top comeuppance. Simon walked this razor’s edge with warmth and intelligence.”

As for all of the varied and highly naughty situations Roderick finds himself in during the course of the film, that was a deliberate pushing of the envelope by its writer-director.

“I thought, ‘This could be my Trojan Horse to put a lot of the things I want to say about sex on the big screen,’” says Waters.

Still, the best thing about Sex and Death 101 (aside from its laugh-out-loud wit) is its underlying premise. Waters couldn’t be more proud of his newest baby.