Bad to the Bone: Five Movie Villains You Love to Hate 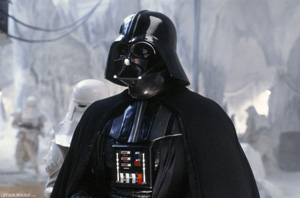 They say a hero is only as good as his opponent. When creating a story, a good writer must effectively balance his flawed protagonist with an even more flawed antagonist whose desires are in complete contradiction with the main character.

The antagonist should be better than the protagonist. The villain should have an edge on the hero that either must cripple the hero’s confidence or put the fear of God in him.

Ever think about who your top five iconic villains in film history are? Here are mine.

Jigsaw from the Saw films

Those of you who are too wussified to see horror films may not know who he is, but based on the $550 million combined international box office take of Saw I-IV, enough of you do. Played in the films by actor Tobin Bell, Jigsaw is a disturbed sociopath who puts his victims through horrifically violent trials in an attempt to help them gain a greater appreciation for life.

This involves leaving complicated traps for his victims that either involve self-mutilation or the mutilation or death of someone else, or their own death if they aren’t clever enough. What is truly frightening about him is that even though he’s insane and his methods are awful and cruel, you can’t help but find yourself somewhat empathizing with the idea behind his motivation.

Before he became Jigsaw, his wife and child were stolen from him and he was diagnosed with cancer. Faced with his inevitable death, he couldn’t help but grow enraged by the way people around him took everything good in their lives for granted.

The contestants in his evil game are obviously no match for him. Just when they think they’ve beaten him, the real game begins.

This was by far Arnold’s best work. He made a soulless killing machine from the future almost charismatically evil. You knew from the moment he stepped in the door that someone was going down, and it wasn’t going to be him.

The scene of the Terminator popping his fake eyeball out then covering it up with sunglasses said everything you needed to know about this killing machine that somehow possessed a sense of robot vanity. His opponents: mere humans. He’s the ultimate adversary because he feels no emotion and no pain.

Then in one of the most brilliant role-reversals in film history, the original Terminator becomes the hero and has to go up against a better, faster and stronger terminator: the T-1000. The new terminator is made of liquid metal, so not only does he not feel emotion or pain, he literary can’t be destroyed.

The iconic images of the T-1000 with his arms shaped into huge knives will not be soon forgotten. And who can forget “Say... that’s a nice bike.”

The Wicked Witch of the West from The Wizard of Oz

No kid has escaped childhood without experiencing this film. Dorothy, whose only weapons are Toto and a bunch of wussbag companions who don’t even have any super powers, has to go up against the Wicked Witch and her army of flying monkeys. Yeah, that’s real fair!

Agent Smith from The Matrix

There are so many iconic images from The Matrix, but nobody will ever forget the first time they saw Hugo Weaving step into frame wearing those black sunglasses and black suit. As the central villain in the first film, Agent Smith was both puppeteer and puppet; the leader of the effort to suppress the human resistance within the matrix, yet a slave to it just like his enemy.

The poster-child for invasive government authority is the perfect counter balance to Thomas Anderson/Neo, whose very nature as a frustrated hacker contradicts government rule. Top that off with the fact that Smith’s expertly skilled at martial arts, and you’ve got yourself one badass iconic villain.

There simply is no denying it. Darth Vader is absolutely the most iconic villain of all time, end of story.

Even people who have never seen the movies know who he is. He’s the ultimate antagonist.

General/samurai/wizard/cyborg/sociopath, Darth Vader encapsulates the characteristics of all my other top four villains and is everything a villain would want to be. He has an army at his fingertips, yet would be fine without it. He is a master swordsman, yet he can kill you without even touching you if it pleases him.

Everything from his helmet and cape, to his robotic breathing, to his booming voice is iconic. His opponent: a naïve little wussy kid from some desert planet who wouldn’t even be fighting the empire if they hadn’t burned his house down.

Not a very even playing field, or so you think. Vader is secretly Luke’s father, and as you watch the original trilogy you realize that Vader could’ve killed Luke at any moment in any one of the films, he just chose not to because he didn’t have it in him to murder his own kid.