Jonathan Tucker: Fond of the People Attached to The Ruins 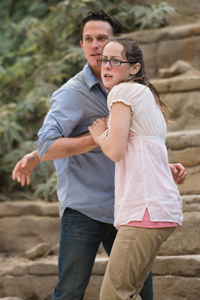 Jonathan Tucker is having the kind of career that dreams are made of.

The 25-year-old actor has starred in a complex drama on television (“The Black Donnellys”). He stole the hearts of art-house movie crowds as one in a group of boys who loved a family of sisters from a distance in Sofia Coppola’s The Virgin Suicides and even acted in a film with not one, not two, but three Academy Award nominated actors (Paul Haggis’ In the Valley of Elah). He is commanding huge attention from major Hollywood players.

In his latest film, The Ruins, Tucker is one of four young American tourists in Mexico who become entangled in some nefarious vines and the strange goings-on surrounding the set of ancient ruins in which they grow. The film’s trailer boasts (rather unabashedly, I might add) plenty of freakish imagery and nausea-inducing suspense.

Now, before the eyes start rolling and sarcasm sets in, Tucker is quick to defend his new movie as a sharp bit of filmmaking, as opposed to another popcorn flick.

“People hear ‘killer vines,’ and they’re like, ‘really?’” he jokes. “It just sounds so genre-y and corny.”

Instead, Tucker refers to his latest work as “hyper-realistic,” “drastic” and “sad.” He also implores audiences to focus more on the huge commitment by the revered names fueling The Ruins. Among its producers are Ben Stiller and his partner, Stuart Cornfeld.

“It was a very talented group of people [telling] the story,” he says.

That story began from a book of the same name by Scott Smith (A Simple Plan). Stiller and Cornfeld managed to get their hands on an advanced copy of The Ruins and almost immediately got the ball rolling to bring it to the big screen.

Director Carter Smith, who got his start in the über-chic fashion world and later at the Sundance Film Festival, added a sly edge to the look of the thriller. That distinct ambiance was realized through the fascinating photography of cinematographer Darius Khondji – whom Tucker raves about.

“The great majority of the film was shot with natural light,” explains Tucker.

This little factoid may seem insignificant to most, but considering all the time and trouble that goes into lighting each movie scene to absolute perfection, this is a sheer act of moviemaking bravado.

Equally impressive are all the special effects in the movie. Artists from films like 10,000 B.C. and I Am Legend helped to provide moviegoers with as believable of a frightening experience as possible. But that believability didn’t seem too easy at first.

“My initial reaction was, ‘Oh, gosh! How are we gonna do this?’” admits actor Smith. “I mean, a killer vine in a book is one thing, but film audiences are more likely to question and challenge that.”

If that’s true, then the intense storytelling and richly talented cast should give The Ruins a big boost at the box office. Which brings us back to Tucker.

Despite his critically praised co-stars like Jena Malone (Pride & Prejudice) and Shawn Ashmore (X-2: X-Men United), you won’t find an actor as studied and observant as he. His knowledge of directors, short films and the work of his peers is truly remarkable.

Tucker speaks of his craft, much in the same way as veteran actors twice his age do. Call him an old soul. Call him a renegade. This is one guy that remains connected to the humanity of performing.

When asked why he took his latest role, he unleashes an answer as steady as steel.

“All the people that were attached to the picture,” he says. “Every single person attached.”

The Ruins releases in theaters April 4.