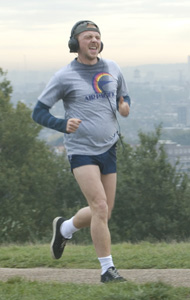 It used to be something that you heard the nutty neighbor lady down the street yell at your kid brother as he jelly-rolled his way to the school bus each morning. Now, it’s a romantic comedy starring Britain’s latest funnyman extraordinaire, Simon Pegg.

Years go by. The baby is now a cute kid named Jake. Dennis starts to realize with each passing day the error of his ways and decides he wants to reunite with his ex.

That’s when Dennis decides to beat Whit at his own game. Fat boy’s going to run.

Run, Fat Boy, Run was written by “The State” alum Michael Ian Black. The script was brought to life through the direction of former “Friends” star David Schwimmer (that’s Ross to you and me). The two most important men behind the scenes share the dubious distinction of being known for their sweet and affable personae – traits that peppered the film’s sensibility.

“In the U.K., we’re a little more prone to using sarcasm and cynicism in social situations,” says Pegg.

Still, he admits that despite some glaring cultural differences, the structure of the joke is still the same: “Ultimately, a guy running around in tiny shorts is funny no matter where you’re from.”

Humor was the name of the game on set. Pegg weaves wild tales of ribald pranks exacted upon him at the hands of Newton.

To list: She filled a pair of discarded underpants with chocolate goo and then left them in his room. Then, there was the day on the press circuit in which Newton replaced each of Pegg’s water bottles with vodka (an act that he admits might have been funnier had it not happened at 9 a.m.). She even sewed the neck and arms of his favorite sweater shut.

When asked how he got her back for all the trickery, he jokes, “By not responding.”

Newton reveled in the playful activity each day of the shoot. She credits comedy as the driving force behind her coming on board the film.

It also didn’t hurt that she would be teaming up with some of the top names in entertainment today.

As for working with Schwimmer, both stars of the film sing his praises as a filmmaker. After all, it’s not every day that an actor is lucky enough to work with a director who can empathize with their creative process.

“I met him, and we just got on great. He’s all about the work,” says Newton.

Pegg agrees, “He’s directed before so I knew he wasn’t entirely green to the process.”

Schwimmer’s past experience, coupled with such a winning cast may have been the key ingredients to Run, Fat Boy, Run spending four weeks on top at the box office in the U.K.

For Pegg, he feels the film is getting just what it deserves: “It’s been received just as it should be.”

So what’s next for Pegg? Well, it’s back to Great Britain where the rosy-faced actor will relax with his wife and take some much-needed time off.