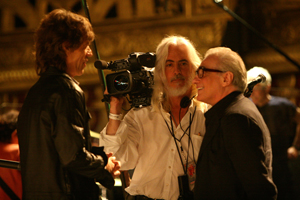 The Rolling Stones are about as immutable as rock icons get. In one of several perky inter-scenes in Martin Scorsese’s concert documentary, Shine a Light, Mick Jagger – the early ’60s iteration – is asked if he can envision himself singing and prancing about stage as a 60-year-old, to which he immediately replies in the affirmative. Flash forward about four decades to New York City, and we can all see for ourselves.

We’re dropped into the middle of several frenetically slapdash planning sessions “starring” none other than an anxious Scorsese. He’s characteristically outspoken and gregarious, and there are more big laughs in the opening 15 minutes than anyone has a right to expect – it plays like a clash of the titans, one giant from the film world locking grips with the rock world in a battle of wills. All relatively harmless though, just the logistics of a major rock concert coalescing: Scorsese wants more lights, the Stones’ management is worried they will set Mick Jagger on fire.

Some of the unpredictable fun we get early on inevitably dissipates into more standard fare – albeit scorchingly first rate – concert cinematography. The roster of overqualified directors of photography employed here as camera operators is actually marvelous, an absolute embarrassment of riches.

Scorsese isn’t messing around either, attacking with his brigade of carefully placed cameras from a glut of angles, almost every one in motion. It’s a beautiful venue – the famed Beacon Theater – and we’re thrust right in the middle of it, proscenium arching above, Jagger running out to us on a jutting extension of the stage.

The music is, of course, the main event here (the film is about 80 percent live performance, 20 percent behind the scenes and archival footage), and the old guys indeed rock pretty hard. It’s around 20 overwhelmingly noisy but well-done numbers (hey, it is a rock show, maybe I should’ve brought ear plugs).

After just a few songs the age factor wears off and deep lines in the Stones’ faces mutate into something more like zero-cool battle scars. The only deteriorated or otherwise lackluster performance element is Jagger’s vocals, which aren’t at all bad, just typically thinned with age.

If you’re a fan, look for a fair share of hits to color the set list. Guest appearances by Jack White and Buddy Guy lend some authentic bluesy variety, but a song with sparkling, poppy Christina Aguilera is both below these rock giants and so painfully of the moment it’s deflating.

Don’t wait for the DVD. This is a concert meant to feel grand and explosive (key word “feel”), and it demands a theater-sized silver screen and the enveloping, blaring DTS audio treatment. Ear plugs optional, but be prepared.