On Making Cinderella: Actress Megan Hilty Succeeds on Broadway and in Hollywood 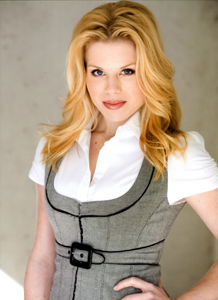 At age 27, Broadway actress Megan Hilty has lived the life of a modern-day Cinderella. Shortly after graduating from Carnegie Mellon School of Drama in 2004, Hilty was whisked away from Pittsburg to New York City, where she transformed into Glinda, the most powerful sorceress in the Land of Oz. Hilty became an overnight sensation in “Wicked,” however, her happily ever after has only begun.

After college, Hilty was supposed to join the national tour of “Little Shop of Horrors” as Audrey, but Gregory Maguire’s 1995 bestseller forever changed her fate. The casting directors from “Little Shop” also cast “Wicked,” and a few weeks before graduation, the 23-year-old was asked to audition as Glinda.

Unaware that she was auditioning in the final callback, Hilty impressed the producers and scored the role of Glinda. She was immediately accepted by longtime fans of “Wicked.”

“I received a lot of dolls that looked like me,” she says. “There was this group called ‘The Megan Hilty Duct Tape Society.’ Their whole premise was that they didn’t want me to leave, so they would show up with pink duct tape and send me rubber ducks wearing my costumes.”

After enchanting audiences for nearly four years, Hilty is expected be featured in her first independent film in June about the Vietnam War. Then in September, fans will see her star as Doralee Rhodes in “Nine to Five,” based on the 1980 comedy.

With plans on releasing an album and a shoe line in the works, Hilty has no plans to slow down.

“‘Wicked’ is going to be around for another 20 years, and I honestly feel like I haven’t gotten it yet. I just want to triumph!”

Megan Hilty stars as Glinda in “Wicked” at Pantages Theatre through May 11.