Salma Hayek: Coloring Outside the Lines 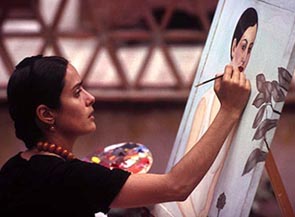 "It’s a little bit harder, because it’s not your area of expertise," muses Salma Hayek. The actress is not talking about copying the painting she immersed herself in while taking on the role of artist Frida Kahlo in director Julie Taymor’s unorthodox biopic, Frida. Instead, she’s talking about the lesbian sex scenes.

"How the hell do you do this?" Hayek wonders out loud. "I hope I don’t look like I don’t enjoy it."

Kahlo was known for her bisexuality. But when it came to infidelity, it was used to lash out after being humiliated by the man who loved her the most, Communist muralist and two-time husband Diego Rivera.

Taymor explores many emotional and passionate aspects of Kahlo’s life, both away from as well as in her art, which the director chose to express in a manner different from the usual film approach, which is to have an actor stroke at endless paintings. Instead, she created fun, frivolous and sometimes shockingly breathtaking sequences that express Frida’s art in three dimensions for the screen. One such scene is an animated surgery sequence by legendary stop-motion animators the Quay Brothers, which comes after Kahlo’s deadly and life-altering bus accident.

"I wanted it to be a period piece that could be understood as a love story ahead of its time," says Hayek, who held onto the project passionately for seven of its 16-year gestation period to get to the screen. Other big names have been attached to the film throughout this time period: Madonna was involved about ten years ago but dropped out, and Edward Norton, who plays Rockefeller in the film, wrote nine uncredited drafts of the script under the guidance of Taymor.

"I was handed the screenplay two years ago, and I didn’t know Frida that way, and I really didn’t want to do an artist’s movie," says Taymor in regard to her introduction to the project. "But it moved me and touched me. And the first writers were the only ones who are getting credit. Ed Norton did a superb job from the original script."

"I had called up Miramax and told them I liked the screenplay, and Salma came to my apartment in Manhattan and for two hours described her passion and history with this project. The political and social palette of the film intrigued me as well."

But the one factor that had Taymor at wit’s end was not Hayek’s drive as a producer, but rather her ability to be a mature enough actress to pull of such a layered and juicy role, based on her previous work.

"I’d seen her in Desperado and Wild Wild West, and I was like everyone else was before they see her in this movie," says Taymor. "There’s no doubt she takes your breath away when you meet her in a visual sense. In fact, it’s a handicap. But I had no doubt after those two hours that she was ready to do this."

Having put Anthony Hopkins and Jessica Lange through their paces in her unorthodox film treatment of the Shakespearean tragedy Titus, Taymor welcomed the challenge as a director of proving that Hayek could handle a complex biopic role in which she must be in every scene.

Talking to the passionate talent behind the finished Frida, it is easy to see that the extraordinary end results came not only an actress who wanted the role of a wild artist who wore her attitude on her sleeve. It also took the brushstrokes of a barrier-breaking visualist who has taken the same imagination she brought to her acclaimed stage version of Disney’s The Lion King, and used that gift of realization to bring the galvanizing history of another mind-bending artist into the eyes of the modernaires.