Prom Night: Hook Up or Get Hacked Up 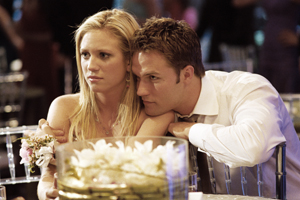 The prom is a rite of passage for many American youths. Gowns and tuxedos are a million-dollar industry. Limousine rentals top in the hundreds of thousands of dollars. Florists go into overdrive, making snazzy little corsages and boutonnieres for girls and guys to show off in photos.

Never could one imagine that the local police or even the area hospitals would get a boost on such an exciting day. Yet, in the new horror flick, Prom Night, it appears that they do.

The horror film stars Brittany Snow, who hangs up her Hairspray dancing shoes in exchange for a role that really pushes her to the brink.

“I never really realized what a hard thing a horror movie would be,” admits the actress.

All the challenging work comes from the it-could-happen premise of her latest film.

Snow’s character Donna is a senior in high school. Everything should be great for her. Unfortunately, she’s been the object of a crazy person’s obsession. He gets arrested, but comes back on the eve of the prom to stalk her and her friends.

Many aficionados of the genre may remember a similar film from the 1980s starring the decade’s scream-queen Jamie Lee Curtis. Although Snow is cognizant of that film, she’s very careful to defend her version as an original in its own rite. As a matter of fact, Snow even tried to distance herself from the earlier movie.

“I was going to watch the original Prom Night, but then I thought I shouldn’t,” she confesses.

Not one to follow in someone else’s footsteps, Snow was very careful to tweak her portrayal, making it her own.

However, the 22-year old is quick to admit that although she gives herself over to the part that she’s playing, it’s still easy to separate the fear that the audience sees in the theater from the fears that she might feel in real life.

So what kinds of things scare Brittany Snow? Surely any performer who can convincingly play scared for months on end (in formal wear, no less) has to be a little jaded when it comes to self-despair. Not her.

“Probably being alone on a desert island or in the middle of the ocean,” she acknowledges. “I kind of have this weird thing with water.”

Since her fear-factor doesn’t involve anything typical like the boogieman or serial killers, one has to question what kinds of scary movies the actress has seen and likes.

“I am a fan of horror films,” she says. “As far as my favorite movie? I think The Exorcist or Children of the Corn.”

It’s no doubt that on the evening of her own scheduled prom, Snow may have been enjoying any one of those films. She admits that instead of getting to attend her school’s formal, she was thousands of miles away, working.

Besides, with roles in films like 2006’s John Tucker Must Die and the upcoming Finding Amanda, it’s a sure bet that everyone involved is glad that she made the choice to pursue acting in lieu of so-called “normal” teenage life.