The Visitor: Humanizing a Culture Clash 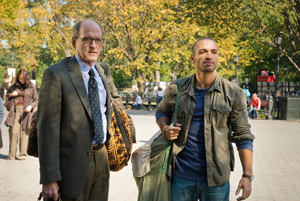 It’s rare that a movie comes along and uses sensitive subjects like the exile of immigrants as its basis to highlight an unforeseen romance – The Visitor does just that.

“It’s not often that you have a story that incorporates so many current issues but does it in a way that it’s not about those issues yet still incorporates them,” says Haaz Sleiman (“24”), who plays an Arab immigrant in the film. “It’s fantastic.”

When college professor, Walter Vale (Richard Jenkins, “Six Feet Under”) returns back to his New York apartment to attend a conference, he discovers an unfamiliar pair utilizing his turf.

Tarek Khalil (Sleiman) and his girlfriend Zainib (Danai Jekesai Gurira) are the immigrant couple who are also surprised by Walter’s arrival, not knowing that the apartment belongs to anyone. When the young couple voluntarily leaves the apartment, they’re left out in the cold, homeless. Walter decides to lend a helping hand and allow the couple to continue to live with him until they find a better means of living.

For actor-writer-director Thomas McCarthy (The Station Agent), The Visitor wasn’t an easy story to script.

“I had to balance two storylines, a man’s emotional journey and also the story of a young man’s journey into descent of immigration and deportation.”

In order to make this film as authentic as possible, McCarthy engulfs himself in an unfamiliar culture.

“I’ll be honest. It’s almost embarrassing to admit, but I didn’t have that many Arab friends, not as many as I do now,” says McCarthy. “It was very eye opening for me to be an American and be so involved in that part of the world and know so little about the culture and the history.”

In preparation for this film, McCarthy and Sleiman visited detention centers, spoke with detainees and traveled extensively to get a sense of what it feels like to be someone of another culture vying to live in America. As an outsider to the Arab culture, McCarthy illustrates many aspects of the culture in the film.

After opening his doors and approaching the awkward situation with an open heart, Walter befriends Tarek and Zanib. Tarek enlightens Walter about the Arab culture, even teaching him how to play the drum.

“I think what’s important is that it strips away the culture differences, religious differences, the political ideas, the different backgrounds and you finally see people connecting on that level, and that’s when you can only and truly experience a true connection and love, and that’s what the movie is for me,” says Sleiman.

“I’m from both Zimbabwe and the United States and to see voices like that on a page was a wonderful thing,” says Gurira. “It doesn’t happen very often and to see the story dealing with such a macro issue in a micro manner, which I really appreciated, the power of Tom’s ability to tell the story subtly but have really large resonances and ramifications. After reading the script it was a no-brainer to want to become a part of it.”

McCarthy portrays truth and honesty in the film so well it brought out saddened emotions from one of its main characters.

“Whenever I see this movie being screened I cry because I see characters, I see people, I see their tragedies,” says Hiam Abbass, who plays Tarek’s mother in the film.