The Elusive Mr. Reeves: Gets Challenged and Stretched in Street Kings 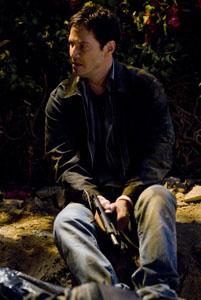 Trying to get to know the real Keanu Reeves is simply a waste of energy.

Though amiable enough, the 44-year-old actor tends to shy away from personal probes, preferring instead to talk about his current slate of projects, especially Tom Ludlow, the incorrigible character he plays in the gritty upcoming cop drama Street Kings.

One of the most intriguing personalities in the movie business, Reeves’ interview tactics and mysterious private life provide little insight into his personality; and although he’s been derided by critics for his deadpan onscreen delivery, he remains one of Hollywood’s most sought after leading men.

The actor first garnered public notoriety when he starred in the 1986 adolescent drama River’s Edge with Crispin Glover – but his first popular success came with the role of Ted Logan in Bill & Ted’s Excellent Adventure, a flick that became a cultural phenomenon and started the Keanu cult.

Over the next few years, Reeves tried to shake off the Ted stigma with a string of projects, starring opposite River Phoenix in My Own Private Idaho in 1991, Dracula the following year and Speed with Sandra Bullock in 1994. But it wasn’t until 1999 that he struck box-office gold again as the monosyllabic superhero Neo in the Wachowski brothers’ The Matrix, which spawned two sequels. Even though Reeves has starred in numerous projects like The Lake House, Constantine and A Scanner Darkly, he still can’t shake off Neo, even joking that he’s become “the ambassador of The Matrix movies.”

In Street Kings, Reeves is Tom Ludlow, a veteran cop trying to cope with life after his wife’s death. When evidence implicates him in the execution of his former partner, he’s forced to go against a corrupt department and questions the loyalties of everyone around him. An obligatory cop-with-a-conscience, Reeves gives his all here physically, spending several days in weapon training sessions with former LAPD veteran Rick Lopez.

“I received a lot of training that included simulation, basic timing techniques, citing, movement and entering rooms. I just wanted to look and feel like I knew what I was doing,” Reeves says. “I’m an actor, and it’s all make-believe, but in the imagining of this world steeped in violence it can be intoxicating, and it was fun to be pushed to a place that I don’t normally go.”

Set in East Los Angeles and directed by David Ayer, who reportedly grew up in neighborhoods like the ones in the flick, Street Kings is a cohesive and violent tale of cop corruption, also starring Hugh Laurie, Common, Jay Mohr, the Game and Oscar-winning actor Forest Whitaker.

Based on the novel by James Ellroy, it shows the psychological effects of corruption within the police department with a unique twist through Ludlow’s lens, which was an intriguing role for Reeves.

“I was intrigued by the level of violence surrounding the character and the dramatic consequences of that,” he explains. “He can be viewed as either someone who kills in the name of the law or someone who delivers justice. Dramatically, there’s a high price to pay, and I was interested in how it would all play out. He’s got grief and has the pressures of his job and is in conflict with his work.”

Reeves, who enjoyed the challenge of playing a character very different from himself, says, “I want to be able to work in different genres and play different roles and be challenged and stretched and explore all that I can do.”