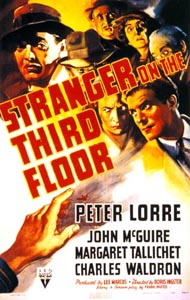 “13 nights, 27 films and NO HAPPY ENDINGS!” screams the flyer for the 10th Annual Festival of Film Noir. Filled with femme fatales, fog machines and obligatory chain smoking, American Cinematheque has rounded up another herd of rare and unreleased movies that exemplify the black and white crime dramas that dominated cinema in the ’40s and ’50s.

Presented in association with the Film Noir Foundation, Return to Noir City (as the festival is being called) has even won over the movie studios, convincing them, for the first time, to dig into their own archives and retouch some of the films. Although many of the noir classics are overlooked, the three-week festival is catering to genre fans and is committed to showing films that, because of lack of publicity or a no-name cast, flew under the radar.

Like this week, which is full of rare double features, paired by actor, plot and setting. There is the James Mason double feature on Thursday, Hostage Noir on Friday, Peter Lorre on Saturday and Swamp Noir on Sunday.

Recommended is the Peter Lorre night because, in addition to Stranger on the Third Floor (which was hailed as the first studio film shot in a completely noir style) and a rare 35mm print of The Face Behind the Mask, the screening will be preceded by The Grand Inquisitor, a short, contemporary noir attempt featuring legendary blacklisted actress Marsha Hunt (who will also be answering questions afterwards). Return to Noir City has enough gooey drama and Humphrey Bogart to make you want to buy a trench coat and pick up smoking again. So pop a Prozac and pick a night – because everyone is on a downward spiral and happy endings are for the weak.

The Egyptian Theatre is located at 6712 Hollywood Blvd., Los Angeles.