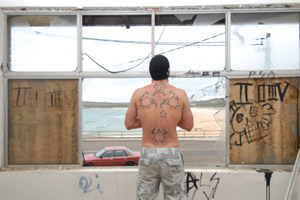 We Americans have a fixed perception of how a surfer should look and act. The thought of a shaggy-haired slacker in some sandy Southern California beach town is never far from our collective consciousness. But in Bra Boys, narrated by Russell Crowe, the stereotypical surfer dude is nowhere to be found.

Directed by Sunny Abberton, who is also a member of the notorious Bra Boys surf gang, this engaging portrait of young men from lower-class beginnings abandons the clichés to reveal violent Australian surfers and their close knit beach community of Maroubra. Abberton skims over the sentimentalism – as evident in the brief scene when all the members attend his grandmother’s funeral – to present a grittier account of his surfing brethren.

We see the tattoos, the disdain for police, the secret handshakes and the endless toe-to-toe fistfights, several of which are captured on home video. At times I was too caught up in the UFC style brawls to care that I was watching a surfing documentary. Then again, on the shores of Maroubra anything less would be uncivilized.