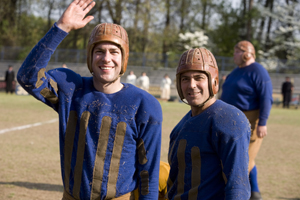 Actor/director George Clooney plays the scoundrel to a “T” in this hilarious comedy celebrating the fun of the roaring ’20s, the not-so-glamorous beginnings of professional football and John Krasinski’s transition from “The Office” to the world of big time movie stars.

While Clooney roots the film in his romance and repartee with Reneé Zellweger’s character and (behind the lens) in his masterful use of the camera to catch both the mood and the color of the era, it’s Krasinski who gets the chance to shine for the first time. Everybody knows he’s got the boyish charm, good looks and comedic timing that work in your average romantic comedy, but, with this movie, he gets the chance to show that he can own the screen when needed.

The film keeps the laughs coming and never seems to get bogged down in the sports world that it takes place in. If anything, it mocks the traditional sports movie and revels in breaking the rules. Perhaps that’s what made it so enjoyable.

The movie oozes the ’20s vibe through and through, echoing the era of fast talk, prohibition and high jinks that makes that time period seem so fun.

Leatherheads is currently in theaters.