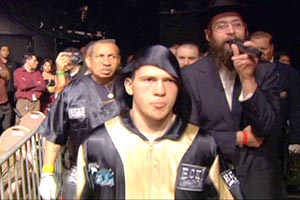 If you have never seen Dmitriy Salita box, the idea of a documentary about an Orthodox Jewish boxer may not seem that striking. Put all preconceived notions aside, however, because the strange mix of the faith with the fight makes for one intriguing film.

Orthodox Stance follows Salita, a Ukrainian immigrant whose calm, respectful demeanor seems to only dim for the brief period that he’s throwing quick, heavy blows at his opponents in the ring, from his first Vegas bout. Fight fans will be floored by Salita’s mix of power and speed, but the true focus of the movie is on a young man who, through the support of his family, community and faith, overcame hardships early in life to become a well-adjusted and genuinely kind-hearted boxer.

In fact, if this film has any flaws, it’s that Salita is almost too good-natured for our conflict-loving media environment.