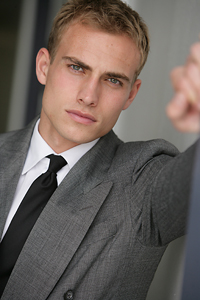 He scored the 2008 Abercrombie & Fitch print campaign, can be seen in national Chevy commercials and for the past three seasons has appeared on “The Janice Dickinson Modeling Agency.”

“Billy has universal appeal,” raved Janice Dickinson during season one of her hit show. “I’ll put in Tom Cruise, I’ll put in Colin Farrell, I’ll put in Mark Wahlberg. He is all of these wrapped up in one.”

Here, Marquart shares his most frequented L.A. haunts and a few other juicy tidbits about himself.

Neighborhood: I would love to have a house in Pacific Palisades.

What are your hobbies? Anything that involves being active. L.A. is great at offering that. I like to go to USC’s track and do speed workouts.

What is your favorite thing about L.A.? L.A. offers so many opportunities. You meet people from all over the world here, and the weather is nearly perfect. I’m glad I didn’t grow up here, but I wouldn’t want to live anywhere else right now.

Fashion Focus
André Leon Talley’s career took him around the world, but his heart stayed in Durham
488 views

Fashion Focus
Cal U students up their wardrobe game with the help of Campus Closet
1,051 views

Fashion Focus
Financial Tips for Getting The Most out of a Shopping Spree
1,354 views

Fashion Focus
How to dress post-pandemic? Just do you.
1,208 views

Fashion Focus
Summer’s coolest dress is an instant classic. OMG, did you see this?
943 views
bid=||