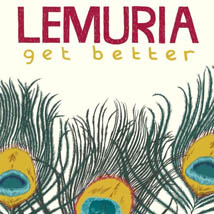 What saves Lemuria to such a high degree, particularly for the audience whose formative years took place in the days of Pauly Shore and alternative rock, is how well they grasp ’90s nostalgia without breathing the irony of nostalgia into their music. This full-length debut from the Buffalo trio is realistic storytelling from the original emo perspective, with vocalists resembling ’90s heroes like Anna Waronker, or an Adam Green/Matthew Caws hybrid (these new renditions being guitarist Sheena Ozzella and drummer Alex Kerns, respectively).

What’s an emo perspective? Try a few: “My secrets end up on oiled canvases in a gallery for everyone to judge,” “I’m miserable with you. I’m more miserable without you,” “Walking around trying to keep my mouth shut, while the pity piles up. Like a goddamn dog with its tail between its legs, ashamed of trying to butter up your obituary.”

There’s a lot of self-pity here, and even a bit of preachiness (“Everybody wants more, when they already have some”), but this is a bona fide college mope, set in tune to a small piece of the ’90s revival that’s already on its way. And the ’90s were just plain rad.

Get Better is currently available.