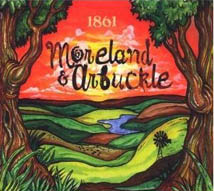 Kansas is known for Dorothy and Toto, corn and flatness. Guitarist Aaron Moreland and harmonica player/vocalist Dustin Arbuckle, however, prove the South and Chicago aren’t the only places that foster ardent, fortified blues.

The duo, with drummer Brad Horner and some guests, bangs out a craggy combination of boot-tapping Mississippi hill country, Delta and rural blues that sounds more like 1961 than 2008. This is purebred blues, sometimes raw as moonshine, other times roof shaking and amped up.

1861, named after the year Kansas joined the Union, kicks off with an aptly upbeat version of Hound Dog Taylor’s “Gonna Send You Back to Georgia,” then moves through backwoods acoustics (Mississippi Fred McDowell-esque “Tell Me Why”), groove and grease (Hammond B-3 laced “Diamond Ring”) and machismo and swagger (R.L. Burnside’s “See My Jumper Hangin’ Out on the Line”).