Morcheeba: Prove the Skye is Not the Limit 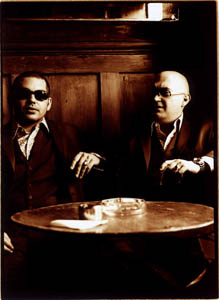 It has been years since Morcheeba’s Paul and Ross Godfrey felt the warmth of the limelight. Who Can You Trust?, their 1996 debut, placed them on the music radar, but it was Big Calm (1998) that earned them international success.

Their sound, a mellifluous blend of funk, blues and trip-hop elevated by the honey-glazed sultry vocals of Skye Edwards, gave them a distinct place in the world of music. However, in 2003, after the release of their greatest hits, Parts of the Process, elements collided and the brothers parted ways with Edwards.

“She didn’t leave; we kicked her out of the band,” Paul is quick to clarify.

With Edwards’ departure, the voice and image of the band and their future seemed uncertain, until now. Dive Deep is a testament to their talent and creativity – proving that everyone can have a second act, if you persevere.

The Godfrey brother’s latest work is a journey about faith, despair and a newfound sense of self.

“It was kind of a rough emotional concept to start with,” recounts Paul. “It was really about facing your demons and getting in touch with who you are. It was about taking down the distractions for a minute and trying to live with my own feelings, then it kind of grew and solidified as we went along.”

The demons that Paul is talking about are the thoughts of doubt that crept into his psyche after creating multiple successful works, losing a member of a band and floating in a sea of uncertainty.

“I think the biggest challenge of making Morcheeba records is,” he chuckles, “making Morcheeba records. When you get six albums in, how do you stay motivated, how do keep yourself interested in what you’re doing? You can really over analyze it, but at the end of the day you have an independent space to record. Once we get in here we get on with it naturally, and the music just flows.”

Open to fresh ideas, the brothers welcomed different voices, beats and emotions in their newest musical venture. Their spirit of experimentation is as alive as their passion for music making.

The formula for this album was totally different; nevertheless, the actual work seemed effortless.

“With this record we were really lucky because all of the collaborators we worked with just sat very naturally with whatever it was we were doing,” Paul says.

What really caused the Godfreys to separate from Edwards? Only they know. What is obvious is that one of his darkest fears was making sure the Morcheeba soul was carried over to this album despite her absence.

“I think that vocals are predominantly the most important thing on a track, and if they’re changing a lot, that might make it feel completely different. I think from a mood and a sonic view, it’s very similar [to previous works]. I really understand [why some fans dig it and others are opposed to it]. Skye was such a strong presence in the band,” he admits.

Dive Deep has been received with mixed reviews; some feel like it strayed from its core, while others believe that in its natural Morcheeba fashion, it has evolved to the next level.

“I don’t think it’s that far out from where we’ve been,” says Paul. “I think what makes it seem so different is the singers across the tracks. But I think mood wise and technically, it’s generally similar to a lot of things we usually do.”

According to Paul, the album is an honest and real representation of the new phase of Morcheeba. It “dives deep” into emotional and musical depths, and the result is a mix of emotions and musical landscapes that range from hip-hop to French pop to experimental beats and ambient noises – in essence what this band has always been about.

When speaking about the title, Paul says, “I dealt with a lot of depression. It took me a long time to bounce back. Dive Deep is a metaphor for that.”