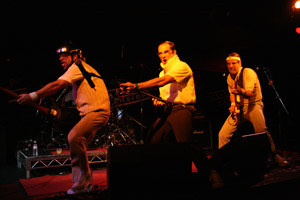 Members Only jackets, red wraparound sunglasses and synthesized keyboards preceded the Revenge of the Nerds parodying, hits jamming ’80s tribute band the Spazmatics. After regally taking the stage to the intro music of Star Wars, the Spazmatics launched into a boisterously silly set that included A-Ha’s “Take On Me,” Devo’s “Whip It,” Dead or Alive’s “You Spin Me Round” and Berlin’s “The Metro,” among many others.

Their ability to perform a highly entertaining show, in addition to competently singing ’80s hits, reinforced the authenticity of the fact that they refer to themselves as a “tribute” band instead of a “cover” band. “Cover” sounds so last call-ish, while “tribute” feels more like something honorable and well thought out.

And let’s be honest: the fine array of songs they resurrected from the distant carefree daze of the ’80s deserved a tribute performance much more than a mere cover. Right?