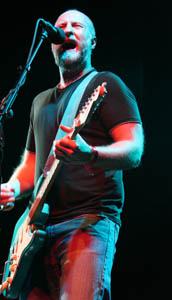 Bob Mould has been playing music and touring for almost 30 years. He was originally a member of Hüsker Dü, one of the most influential American bands in the ’80s.

Mould has also put out albums with Sugar, a great band in their own right, as well as numerous solo albums. This isn’t a game of Bob Mould fun facts, but rather a hint into the legendary status that this guitar hero occupies.

If you haven’t kept up with Mould’s extensive career, two things are striking about his live performance. First, and perhaps this should be an obvious one, is his age, and secondly, he can still create a thick sound with his roaring guitar. On his new album District Line, Mould returns back to old form and doesn’t spare any expense for his live audience.

The truth is, Mould is inseparable from Hüsker Dü. To only acknowledge one would do an injustice to the other.

And it was quite apparent from his live performance that Mould, along with his backing band, is a great fan of the Hüsker Dü sound and songs. At the very end of the set, Mould rewarded the audience with a few Hüsker Dü singles.

At the very beginning of “I Apologize,” one of the most recognizable Hüsker Dü songs, the energy in the crowd, as well as onstage, changed. Mould played those songs with surprising intensity, passion and with a great big smile on his face.