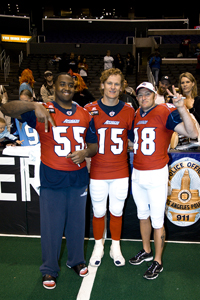 In 1995, when the L.A. Raiders left the ancient confines of the Memorial Coliseum, many football fans pined away for the resurgence of the next great football team to hit the Southland. They waited and waited, but nobody ever came. No Cardinals. No Chargers.

Gridiron fans were fed up, and the feeling of hopelessness was a common sentiment, to say the least. Angelenos had enough.

In 1998, UCLA graduate Casey Wasserman had enough as well. Wasserman, C.E.O. of the Wasserman Media Group, had acquired the approval to bring back professional football to Los Angeles. He was ready to win back the loyalists who felt abandoned by big business and left behind with no pom-poms.

Since 2000, the L.A. Avengers have been winning fans over one-by-one as home attendance has increased steadily over the years. There is a strong fan base willing to make Avenger football here to stay.

Attending one of the Avenger home games at Staples Center is reason alone to see why the AFL has become one of the fast-growing sports in the L.A. area. People go nuts.

The playing field is 50 yards and can make for some exciting pass-play patterns that can tally up the scores in the blink of an eye. Led by one of the league’s top young quarterbacks, former Texas Tech standout Sonny Cumbie, the Avengers play high-flying, smash-mouth, in-your-face pigskin.

“It’s an honor to play in front of these fans in L.A. because they are the ones that truly love the game of football,” says Cumbie. “Their support means a lot to all of us on the team. We want to fill the seats and win games for them.”

On March 20, the Avengers played host to the hard-nosed Philadelphia Soul, a team owned by celebrity rocker Jon Bon Jovi. The energy in the arena was as electric as one his concerts. Richie Sambora, eat your heart out.

Every seat at Staples Center provides a great view to all the bone-crunching action. This particular night all fans in attendance were treated to free fiery red wigs in support of the crimson Avenger squad.

It looked more like a crowd of Cincinnati Red fans than the normally Purple and Gold adorned stands that fill up for a Lakers game. On this night, the Staples Center belonged to one team – the L.A. Avengers.

The Avengers bring a certain zest that can be void from the stop and go pace of a baseball game. Avenger fans utilize their vigor to trash talk the opposing team and have as much crazy, loud fun in the process.

All of this dynamism and passion were at high volumes when the Avengers took the field blaring sounds from some of L.A.’s favorite hometown bands, anthems like Van Halen’s “Hot For Teacher” and Jane’s Addiction’s “Go.” All of this adds to the fervor of a football game that has been crossbred with a rock concert.

If the game is too distracting for the ADD set, there are several opportunities to entertain the wandering eye. The cheerleading gang, the A-Team, is as fluid and agile as most NBA or NFL cheering crews.

If that doesn’t pump you up, dancing like a hopped-up devotee will surely earn you a three-second spot on the Jumbotron. Not enough? Well, how about the Mini-Corn Dog Eating Contest? I’m so not kidding.

Overall, an L.A. Avengers game guarantees the thrills and enthusiasm that has been lacking from the spirit of local pro football fans who have missed their fix of watching the heat of competitive football.

For that, we say thank you, Casey Wasserman. And thank you, L.A. Avengers. Your time has arrived.

The next L.A. Avengers home game is April 12 at 7:30 p.m. at the Staples Center. For more information, visit www.laavengers.com.

Jason R. Martinez is a local freelance reality television producer. He is a recent convert and proud fan of the L.A. Avengers.