The Dodgers Look Great: This Season Just Might Be What L.A. Fans Have Been Waiting For 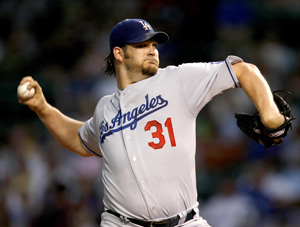 For all the glory moments the Dodgers have given Los Angeles in these past 50 years, it must be admitted that there have been relatively slim pickings since the ’88 World Series. Dodger fans have reluctantly talked of past glories if only to shield themselves from the humiliation of the passing years as the Yankees or even the Red Sox now celebrate multiple championships. Last season’s disappointing fourth place ending didn’t help any.

Yet, hope springs eternal, and if the Dodgers opening series against the Giants (March 31-April 2) is an indication of things to come, Los Angeles may be basking in triumph once again. To put it bluntly, the Dodgers look great.

From Brad Penny’s near seven innings of shutout pitching to Jeff Kent’s towering homer at his very first at bat and catcher Russell Martin’s first nailing of a base runner, there seems to be something in the air. Manager Joe Torre has talked about the importance of perpetual determination. And maybe that’s what it is.

The boys are hungry. It is a hunger that can be seen in Takashi Saito as he charges from the bullpen. It can be seen in Rafael Furcal’s scrappy game-winning slide to home plate in game two. It is a hunger that is more than evident in third base coach Larry Bowa during his freakout session aimed at umpire Ed Montague when the ump had the audacity to tell Bowa not to step outside the coach’s box.

The incident culminated with an overturned Gatorade cooler in the Dodger dugout and a three-day suspension for Bowa. What is even more telling is that Manager Torre offered no condemnation of Bowa’s behavior saying only that he approves of “a sense of urgency.”

In that case, he should love Dodger Fans, who after 20 years without a pennant know all about a sense of urgency.