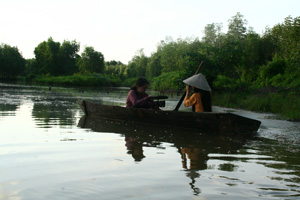 Leprosy is one of those diseases that we (in SoCal) hear so little about that we just push the disease into the attic of our minds, letting it collect dust with other things that we no longer consider relevant. But, Loyola Marymount University senior Allyna-Rennee Nguyen knows otherwise.

Leprosy may not be on everybody’s minds, but it’s there, plaguing a hidden population. The fact that leprosy is relatively in the dark only pushed Nguyen to make a film on it.

“I felt like I needed to do it,” Nguyen asserts. “When I was young, my dad told me a story about Han Mac Tu, a Vietnamese poet [with leprosy] who died when he was only 28.”

The story left enough of an impression that some 15 years later Rain Season has come to fruition.

Upon receiving the Donald A. Strauss Public Service Scholarship award, Nguyen traveled to Ca Mau, a village on the southernmost tip of Vietnam, to film her documentary. Although Vietnam is by no means the only place affected by leprosy, Nguyen had her reasons for going.

“I was born in Vietnam,” explains Nguyen. “And I always like working with the poor. In order to work with the poor, the most important thing is communication. I didn’t want to go somewhere where I didn’t speak the language and I couldn’t communicate very well with the subject.”

While language may not have been an issue for Nguyen, she faced other difficulties in the region.

“We came during the rain season,” Nguyen recalls. “Hence the title. Ca Mau is located on the very tip of South Vietnam – near the ocean – so there was a lot of flooding and storms.”

This made filming somewhat problematic. Not only did the rain prevent Nguyen from traveling to her subject’s house, the government also had their issues concerning the impact a film on leprosy might have on the country’s image.

After two years of research, filming and editing, though, Nguyen is able to finally shed some light on the often unheard and unseen issue of leprosy. And she isn’t finished.

“I want to add more to the pot,” Nguyen muses. “I want to write films that have some sort of social theme, and I want to get involved with an organization that works with refugees. I particularly want to focus on Southeast Asia and the Middle East – those places have the most problems in terms of human rights violations and women’s rights.”

And, while her father’s story may have greatly affected her, films like Rain Season are fundamental in raising awareness.

“You can’t just learn by reading up on it,” states Nguyen. “You need to see it for yourself.”