Uncover the Mystery of Brittany, France: April in Paris? Why Not Stray from the Beaten Path! 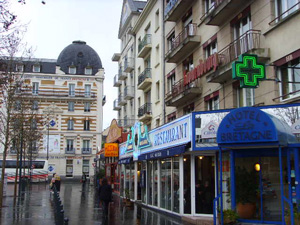 Some people are happy just to see the Eiffel Tower and take its picture. Others wouldn’t dream of leaving Paris without treading each and every stair to the top of the monument. If you fall into the latter category, you’ll be absolutely thrilled at what you’ll find in Brittany.

This region along France’s northwest coastline hosts such places as the mysterious Carnac, the aptly named Savage Coast and Brittany’s bustling capital city, Rennes. A Rail Europe France Rail Pass will secure your seat on a train that zips from Paris to Rennes in about three hours.

Like many of the cities and villages in Brittany, Rennes was once a fortified walled city, and there are places where you can visit the remnants of the wall. But Rennes is very young at heart; as the home of several colleges, the city is a vibrant playground for residents and visitors alike.

When you hop off the train you’ll be right in the heart of the city, within walking distance of its many attractions. To make it even easier for visitors, there’s a hotel right at the train station. You may want to consider staying at one of the many nearby small boutique hotels, however, because they’re a little closer to all of the fun shops, sidewalk cafes, bakeries and bars.

Rennes is a great place to bar hop. This is a fun activity even if you don’t drink alcohol – despite what you may have heard.

French people are very friendly and many of the younger folks speak at least some English. You never know when you’ll get to witness some impromptu entertainment; don’t be surprised if a local starts singing or playing harmonica after their dinner or a few drinks.

Rennes is also home to one of Europe’s premiere music festivals, the Transmusicales Festival. The festival happens every December at the Rennes Airport and is known for breaking new acts or hosting performers who are very hot at the moment.

Some of the names that appeared at the 2007 festival were Kate Nash, Galactic, Rodrigo & Gabriela and Yo Majesty. Shuttles run from the downtown area out to the airport, and these concerts often go on until the early morning. Needless to say, this annual party is a music lover’s paradise.

Shopping in Rennes is extremely fun; streets are lined with hip shops selling apparel, art, gadgets and, of course, day-to-day necessities. You certainly won’t be bored in Rennes, but don’t forget that France Rail Pass and the places it can take you!

The city of Quiberon is in western Brittany on a peninsula that juts into the Atlantic Ocean. This stretch of coastline is called the Côte Sauvage or Savage Coast, and the name is derived from the rugged nature of much of the shoreline and the fact that high winds make naval navigation here very tricky. But that means there’s plenty of spectacular scenery.

Quiberon also has a sheltered beach with stretches of clean sand where the wind provides ample opportunity for surf sports, including zooming down the beach on a wind-powered schooner. Quiberon still operates as a fishing village, and a fresh seafood lunch or dinner is the perfect complement to a day spent on the beach.

Very nearby Quiberon is Carnac, a mysterious place filled with stone monoliths that were erected by an ancient culture. There’s an interpretive center at Carnac that offers some fact and some theory as to who put these countless rows of stones here and why, but no one knows for sure.

Other must-see places in Brittany include Dinan, where the walled city is completely intact, and the Emerald Coast at St. Malo, a one-time haven for pirates and privateers.