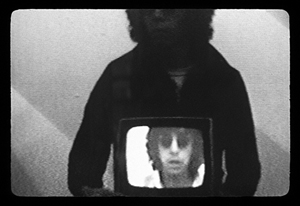 California Video offers a nice antithesis to the typical celluloid our state is known for: mindless muddles of things blowing up in place of plot and pornography. These experimental videos from the last 40 years purposely lack a story, versus whatever film is currently No. 1 at the box office.

In 1965, artist Nam June Paik famously exclaimed, to be quoted by video artists ad infinitum, “Artists will one day work with electronic apparatuses the same as they now work with a brush,” and while Paik could have been referring to the advancement in CGI, it’s more likely he was anticipating the 50 single-channel videos and 15 installations on display at the Getty.

Single channel typically refers to a video playing on a TV set or projector, while instillations use sets to create sculptures – witness Paul Kos’ Chartres Bleu where 27 silent screens create a new age stained-glass window. As these panes are traditionally found in holy places, questions of where God now resides cannot be ignored.

Joe Rees and Target Video (no relation to the store) present the single-channel The Cramps Live at the Napa State Mental Hospital (1978), a frenetic black and white piece with the band singing into mimed microphones as mental patients dance to the music.

Reason enough to go is the reconstruction of The Eternal Frame where the Bay Area art collectives T.R. Uthco and Ant Farm re-enact the Zapruder footage of JFK’s assassination – and the reactions of the passerbys who witnessed their filming in ’75-’76. It’s presented in a 1960s living room with numerous pieces of JFK memorabilia.

California Video is an ideal way to inoculate yourself before the Summer movie season invades. (Look for Campus Circle’s Summer Movie Preview May 7!)