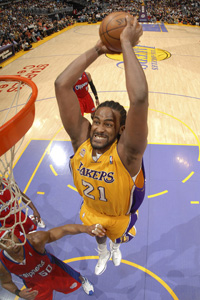 “Any day of the week, if I’m coaching in this league, give me Ronny Turiaf...” —ESPN commentator and former All-Star point guard Mark Jackson

When you hear Ronny Turiaf’s voice, you have to be taken aback a little. Talking to a six-foot, 10-inch, 249-pound professional athlete for the first time, you always expect to hear the deep voice of Dikembe Mutumbo on the other end.

Turiaf’s voice is cool and natural. He is well-spoken with the remnant of a French accent from his days growing up in Paris.

It’s March 8, and Turiaf has just come off an impressive 13-point, eight rebound and five block performance against the Clippers the night before, and you can tell by the way he talks that, more than anything, he enjoys the game of basketball and the pressure that comes along with playing for the Lakers.

“Just wearing the Lakers jersey at first puts pressure on you. It’s like wearing a Yankee jersey. Everybody is looking at you,” he says.

Over the last three years, the Los Angeles Lakers forward has come to define the term “impact player.” Whether he is diving for loose balls, protecting the paint, grabbing rebounds or igniting his team from the bench, Turiaf’s footprint can be seen in every Lakers win, even if it isn’t advertised on a stat sheet. For Turiaf, winning and team have always come first, ahead of his own recognition.

While superstars, like Lakers guard Kobe Bryant, have helped to define the NBA in the ESPN era, role players like Turiaf have become the catalyst for transforming a ho-hum team into a championship contender. His role may be ever-changing with the maturation of young phenom Andrew Bynum and the addition of All-Star forward Pau Gasol, yet Turiaf gives what he can in every game.

“It’s all about team, baby. That’s what I care about,” he states.

Turiaf isn’t one to complain about minutes or getting his shots, he simply plays basketball the way the Lakers need him to. That’s what makes him special in the eyes of the front office, the fans and his teammates.

Turiaf was born in the small French-owned Caribbean island of Martinique and grew up playing basketball in Paris with current NBA players Tony Parker, Boris Diaw and Mickael Pietrus. After helping lead France to the under-18 European championship, he made his way to Washington state where he helped mid-major Gonzaga to four straight NCAA tournament appearances, earning WCC Player of the Year in his senior season.

After being chosen by the Lakers in the second round of the 2005 NBA draft, Turiaf’s career was stalled when a routine physical revealed an aortic root that required open-heart surgery. The procedure forced the Lakers to void his rookie contract.

“[After the surgery] I went back to Gonzaga, took care of myself, got myself into basketball shape, and five months later, I was back on the basketball court.”

Of those five months, he spent three playing minor league basketball in the CBA, then rejoined the Lakers in January 2006, where his blue-collar work ethic and dedication to the game not only overshadowed his heart problems, but also made him a fan favorite in the process.

Now, as part of the self proclaimed “Bench Mob,” Turiaf, along with teammates Luke Walton, Sasha Vujacic and Jordan Farmar, helps provide the much-needed spark from the Lakers second team.

“I think that’s what makes us such a good team because on a nightly basis, every game, we can have somebody else step up to the plate and have success.”

The Bench Mob provides problems for Lakers opponents with a new look that is younger and faster than the first team, giving the Lakers versatility that is hard to define; a versatility that confuses opponents who have slowed their game down to compete with the strong half-court efforts of stars Lamar Odom, Bryant and Gasol. Opponents often get run out of the building when the Mob gets going.

“You can’t just say, ‘OK, we’re going to focus on Kobe Bryant, and we’re going to stop the Lakers because all we have to do is stop Kobe Bryant.’ You can’t do that. You have to stop Lamar Odom on the perimeter and inside. You have to stop Pau Gasol shooting jumpers on the outside and Derek Fisher knocking down three-pointers. And then we have [the Bench Mob] coming in.”

While most experts would consider the Lakers bench to be the best second team in the league, Turiaf admits that he and his teammates don’t really think in those terms.

“We joke about it every once in a while, but we don’t pay attention to anyone else’s bench … all we worry about is the confidence we have in each other and what we can do on the basketball court.”

The Lakers are near the top of the league in both bench scoring and defense this season. In this year’s crowded Western Conference where less than three games separate the top six spots, the Lakers have vaulted themselves into the discussion as favorites for this year’s championship.

For a team that has “underachieved” in the years since Shaquille O’Neal left town, its nice to be back on top. With Turiaf’s output and effort playing a major role in the Lakers’ success, it would be easy to see him leaving the team at year’s end for a bigger contract and a more substantial role elsewhere.

He sees things differently: “If the Lakers want me to stay part of the organization, I would be more then happy to stay. The fan base out here in Los Angeles has really embraced me. I’d rather be here, where I know people care about what I do, than be somewhere else. I’m a Laker for life.”

Lakers fans wouldn’t want it any other way.