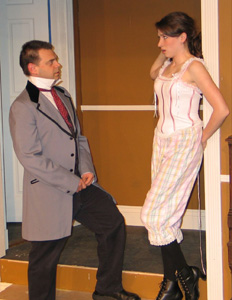 Approximately seven years ago, Steve Martin had completed his first draft of an adaptation of Carl Sternheim’s 1911 play “Die Hose.” Now, his translation, “The Underpants,” offers well-timed innuendo as well as the satirical look at German bourgeoisie culture that had been breathed into Sternheim’s original.

Relating the story of a government clerk and his wife, the latter a minor celebrity after her loose underpants drop while she looks for the king at a town parade, “The Underpants” is written with a quick wit but, in this particular incarnation, slow in coming to life. Amanda Jaros stars as Louise Maske, owner of the loose bloomers in question, but it is James Jaeger (as husband Theo) who more strongly commands the stage. His eyes are frighteningly intense and his prominent speech overpowers the hesitant delivery of Jaros, who lacks natural comedic presence.

Frank Versati (Colin Kramer) and Benjamin Cohen (Eric Rummel), those meant to bring real comedic life to the show in the form of room renters actually there to charm the accidental exhibitionist, also lack the believable delivery necessary for yuks, though Cohen’s character allows anti-Semitism to become an issue here, albeit without bringing down the play’s mood.

The pacing of the show is at first delivered quite slowly with this cast, and characters are not incredibly believable on the whole; however, things pick up with a surprise home appearance by the king (a rather stoic Richard Leppig, who lacks that dreaded theater voice which has cursed so large a portion of the Sierra Madre cast). Look for an excellent “sausage in the oven” reference early on.