The Billionaires: Really Real For Forever
(Too Soon) 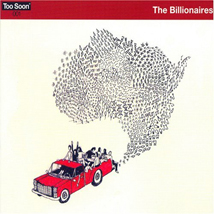 At first, the Billionaires sound like they don’t quite belong here in the 21st century – they’re a little too cheerful, a little too happy-go-lucky, and one gets the impression that they’re approaching the world with a wide-eyed innocence. Still, their enthusiasm is infectious, leading to involuntary head-bobbing.

However, the initial blast of catchy pop simmers down into mellower fare, probably signifying a maturation process of some sort. On “Confidence,” the last song on the album, the band croons, “This is how we lost our innocence/You’ll never believe what we’ve been through.” It’s all a bit overdramatic, but given the contrast between the first song and the last, it’s also kind of believable.