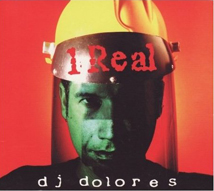 DJ Dolores is a Brazilian artist, and he opens 1 Real with something you’d typically expect to hear spilling out of a hip Rio disco. “Deixa Falar” is full of barks, handclaps and exotic percussion, slinking onto the dance floor animated with tasteful horn fills and short bursts of chanted lyrics sung in the Brazilian national language, Portuguese.

From there on, though, the music is far from typical. “Wakaru” remains danceable while being sped up to hyper-speed, and the inclusion of a few words in Japanese indicates that the song may have been inspired by the hurry-up lifestyle of Tokyo or similar Asian cities.

DJ Dolores leaves the disco altogether in favor of chilling out on “Shakespeare,” a cover originally done by Brazilian star Cadão Volpato that’s sung here in French by Marion Del’Eite. The use of accordion on “J.P.S.” gives the song a distinctly continental feel, while “Flying Horse” is a trippy piece of juiced-up surf rock.