Future Kings and Queens: The Day the World Died 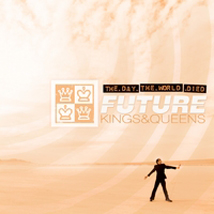 Equal parts Depeche Mode, Thomas Dolby and Apoptygma Berserk, L.A.’s Future Kings and Queens debut release, The Day the World Died, touches on so many of these sounds, while skillfully rushing them forward into the 21st century with a drive and intensity that will please fans of new wave and synth-pop alike.

Essentially a one-man act conceived by former Jupiter Blue frontman Dickie, these songs are well crafted, fun and danceable. Some occasional lyrical fumbles are forgivable; after all, who hasn’t sung along to “Hungry Like the Wolf” and suddenly had it dawn on them how silly the whole thing is?

Highlights include the fierce dance anthem “Immi’s Fire,” the catchy pop of “Mantissa,” introspective pondering on “Boy Blind” and the tongue-in-cheek jabs of “Mister Indifference.” The album’s only fault is it does get a bit long.

A few of its 15 tracks that don’t quite make the grade in comparison to stronger components might best have been left to the vaults. However, there are enough of those dazzling tracks to make this a satisfying debut.

The Day the World Died is currently available.