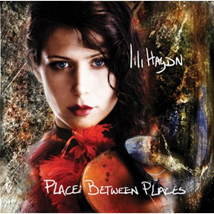 Although I first saw Lili Haydn give Page and Plant a run for their money as their opening act years ago, and George Clinton dubbed her the “Jimi Hendrix of violin,” Haydn’s new release, Place Between Places, shows her, as the title implies, in a place between Kate Bush and Sheryl Crow. Her voice, which straddles an in-between realm of sweet breathiness and a longing rasp, is well complemented by her violin’s counter-melodies that wrap themselves around her vocals like the pairing of a perfect duet.

Her message is bittersweet, in observation of the sadness of the world at large without giving in, maintaining always that faintest glimmer of hope. Instrumental portions, like “The Reverie,” “The Last Serenade” and “The Power of Five” (which counts because she uses her voice purely as an instrument), are where the classically trained Haydn shines, as if she’s poured her very soul into the strings of her violin.

The album closes triumphantly with “Maggot Brain,” whose solos remind us of why she’s received that Jimi Hendrix comparison, as Haydn uses a distortion pedal to rock out to rock anthem proportions. Fans of Tori Amos and Sarah McLachlan will find Place Between Places at home in their collection.

Place Between Places is currently available.